Live exporters back industry push for full access to China 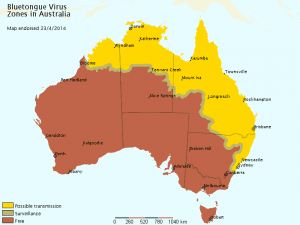 Negotiations to develop a protocol that would open the way for Australian feeder and slaughter cattle exports to China are progressing slowly, with discussions still focused largely on addressing Chinese concerns around the Bluetongue virus.

Australia currently ships around 50,000 dairy cattle to China each year under an existing protocol which allows the export of breeding cattle.

Cattle exported under that protocol can only be sourced from southern areas outside Australia’s “Possible Bluetongue Virus Transmission Zone”, which covers most areas of Northern Australia above a line running from near Sydney to Broome in North Western West Australia (see map above left). Exporters are required to follow rigorous selection procedures and undertake costly testing to meet the requirements of the breeding cattle protocol.

Australia and China are also currently negotiating the development of a new health protocol that would allow Australia to export feeder and slaughter cattle to China to help meet the country’s rising demand for beef as well.

Australian negotiators and epidemiologists are working with Chinese officials to explain that the serotypes of Bluetongue that are of concern to China do not exist in Australia, and that Australia’s freedom from these serotypes is underpinned by a world class surveillance program with over 30 years of surveillance history.
Demonstrating the effectiveness of Australia’s well-established surveillance programs will be the key to developing workable and long term trading relations with China, industry officials have explained to Beef Central.

The Australian industry is currently seeking the best possible access for cattle from across the country to supply China with feeder and slaughter cattle in future, an outcome it believes will be necessary to meet the level of commercial demand coming from China, while also delivering the necessary assurances to both Australia and China that health conditions are being appropriately managed.

A clear majority of exporters supported the industry’s current position in favour of the best possible access for all areas of Australia at a recent Australian Livestock Exporters Council meeting in Brisbane.

ALEC chief executive officer Alison Penfold told Beef Central this week that she could not comment publicly on the status of the ongoing negotiations between Australia and China, except to say that they remain focused on highly technical details.

However she said the Australian industry’s position was that Australian cattle do not pose a Bluetongue risk to China as the serotypes present in Australia do not cause clinical disease or losses in productivity within the northern or southern cattle population. Further, full access would be required for Australia to supply the numbers of cattle China needed.

“Given the volumes China is talking about, they are going to need to have access to cattle from right across Australia,” she said.

The opening of a feeder and cattle export trade to China is considered an exciting growth opportunity, particularly for the northern cattle industry which is most in need of more diverse market options.

While that excitement continues to fuel expectations that a breakthrough should be close at hand, officials say the process of negotiating new market access agreements is typically slow moving, particularly when they involve major trading partners such as China where the key officials involved in negotiations manage significant workloads.