ABARES has released an informative and detailed analysis of the value of Australia’s live export trade and the worth of an animal once it leaves Australian shores.

However the report contains a disappointing lack of emphasis on the benefits of the live export trade to all producers within Australia, in terms of the role it plays in underpinning cattle and land prices which both directly impact the long-term viability of the cattle industry.

I’m a cattle producer in the Northern Territory gulf involved in a small family operation which supplies to live export.

In my view the ABARES analysis provided an inadequate representation of the events and issues that surrounded the industry over the last two to three years.

The knee jerk ban implemented on live cattle exports in 2011 by the-then Labor Government was a significant factor that affected cattle trading across Australia.

The report ignored live export as an important source of competition and an alternative avenue for all producers.

Without the competition for cattle provided by the live export trade, producers would not be viable, herds could not be maintained and the ‘economic activity, environmental management and social well-being’ that the industry underpins would be lost.

Without live exports, producers in northern Australia would be be solely reliant on processor buyers and in direct competition against animals that are better suited to those operations.

The ABARES report also did not take into account the role live export provides by competition and significant support to the Australian dairy herd.

Dairy cattle account for about 10pc of the national cattle herd, and underpin values in it by up to 20pc, according to a 2007 report on the value of the livestock export industry to regional Australia.

The ABARES report noted approximately 180 producers in the Northern Territory derive more than half their receipts from live export trade.

But many more properties can and do opportunistically target live export which has a significant impact on their viability and ability to earn income.

Due to the underpinning of values that live export demand creates, through market support and the fact that domestic markets are not oversupplied with stock, some properties which never sell to live export still benefit from the trade’s existence.

In the following chart of turnoff from NT properties, only half the properties indicate a very high reliance on the trade, but the reality is that nearly all would utilise it directly at varying periods. 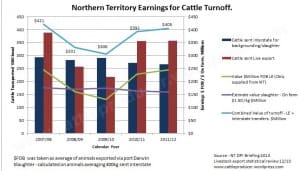 There have been producers throughout Australia in the past 12 months who have supplied live export because there were no other selling alternatives to them, or that in fact live export was more competitively priced than values offered by meatworks.

This includes producers from as far south as Southern Queensland and New South Wales who are supplying the live export trade through Darwin. They may not have been reliant on live export in the past but it is significantly now supporting their financial viability.

A generalised statement in the report insinuated that cattle diverted from domestic processing to live exports caused the fall in the number of northern abattoirs. This is false.  It fails to recognise the required rationalisation of the processing industry that occurred throughout the 1990s to improve economies of scale due to their then decentralised nature. Statements like these made by authors of reports should be backed up with facts stating which abattoir and when and why to authenticate their reasoning.

The final report also left me with the impression that the authors did not want to offend the funder of their work, the Government.

It was notable in its omission of one of the most significant sources of costs for the industry, that being the Government, its regulations and its requirements.

Recently it has been reported that some ESCAS export requirements are being charged in excess of $670 per hour by officials. The export industry isn’t alone in this regard of excessive cost infliction by government enforcement. Some processors suffer costs of up to $200,000 per annum for one single AQIS inspector on processing chains to maintain accreditation for market access. Previously the Government had subsidised these costs for processors by up to 40pc, this rebate was withdrawn in  October 2012.

It also failed to provide statistical information to illustrate the fact that when the trade to Indonesia was banned in mid-2011 that Australian overall cattle prices fell through the floor.

We personally realised a loss of direct value of over $300 per beast for animals that should have been sold in 2011 but were held nearly two years longer until any market could take them. Costs of animal maintenance on property, finances or overheads are not included in that loss.

Producers were hurting after the ban and continue to do so. Some felt impacts even though they didn’t even sell to live export, and never did. These are all circumstances that should have been noted in this report but were not. These values may not have simple measurable monetary quantities but they were significant.

If the full facts about how people are affected by serious market distortions and the real market happenings are not recorded, how are people reading these reports supposed to be properly informed?

The ACIL 2009 report, developed for the animal rights sector was included in the ABARES report, which is absurd. In my view the calculations in the report were not accurate – it under-estimated by at least half the direct attributable costs to producers if live export markets stopped.

In conclusion I felt the ABARES live export trade assessment report was significant in the information it provided regarding importing countries, the markets that live export animals are sold to and expectations of those markets.

I feel it has let down the live export industry as a missed  opportunity to illustrate the fundamental benefit within Australia to Australian cattle production and a broad range of producers that the trade provides.