Dignitaries on stage at the official naming ceremony of the Greyman Express in Guangzhou, China, on Friday. (For more pictures view picture gallery at bottom of article)

Beneath the grey skies of Guangzhou on Friday a rare gathering of livestock export industry stakeholders from Europe, Asia and Australia was immersed in the explosive colour and pageantry of a Chinese ship naming ceremony.

The Greyman Express is the latest manifestation of a recent investment worth hundreds of millions of dollars by family-owned Dutch shipping company Vroon on the modernisation of its globe-traversing livestock shipping fleet. 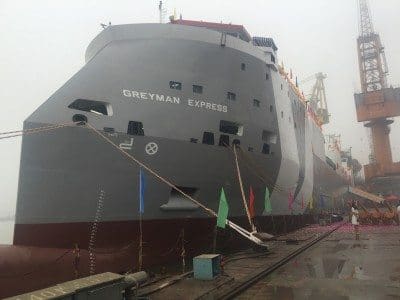 The Greyman Express at the Cosco Shipyard in Guangzhou. (Click on pictures to view in larger format)

The state of the art vessel has been chartered by Australian exporting company Frontier International Agri and will deliver its first shipment of cattle from Darwin to Jakarta for the Hasan family’s TUM company feedlots in early April.

The Greyman Express is the sixth of seven brand new, purpose-built livestock export vessels constructed by the China Ocean Shipping Group (Cosco) at its Guangzhou shipyard in Southern China for Vroon in past three years.

Yujin McEwin, wife of Frontier International Agri’s chief financial officer Will McEwin, officially became the ship’s godmother when she formally named the vessel at a ceremony immersed deeply in Chinese culture and ritual at Cosco’s Guangzhou shipyards on Friday. 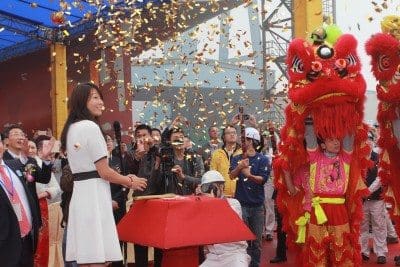 A traditional Chinese lion dance, bounding kung fu performers and beating drums added to the spectacle and sense of occasion for the 100 guests in attendance. The guest list included cattle importers from China, Indonesia, Vietnam and Japan and representatives of Frontier International Agri, Vroon, Livestock Express and Cosco.

The event also underlined the ongoing growth of Frontier International Agri, which launched just over two years ago. The business is jointly owned by Ruralco and its senior managers and since its inception in early 2014 has shipped around 200,000 beef and dairy cattle from Australia, primarily to customers throughout South East Asia and China.

Taking on a second long-term charter significantly reduces the exporter’s reliance on spot shipping, a move that will provide greater predictability of scheduling and cost-efficiencies as a result.

A key challenge when using vessels on short-term charter is the lack of predictability as to when the vessels will arrive in port and be available for loading. Each day too late or too early that a ship arrives can add tens of thousands of dollars in additional pre-export-quarantine and/or demurrage costs to the expenses incurred by an exporter.

Longer term charters usually involve lower lease rates and give exporters the certainty of having a vessel of the right type and size at the right time to execute shipments, which affords greater predictability and control for their operations. The flip side is that exporters with long-term charters face a challenge to keep the vessel optimally utilised at all times because they still incur charter costs regardless of whether the ship is moving with livestock or standing idle and empty. 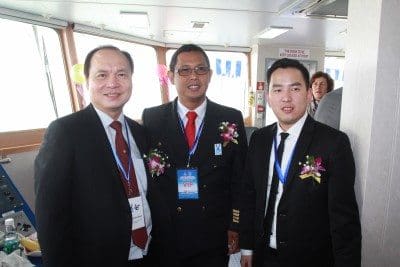 Indonesian cattle importers and lot feeders PJ and Daryl Hasan with Captain Murillo on the Greyman Express. TUM will receive cattle from the maiden journey of the vessel in April.

The Greyman Express is one of seven new generation, purpose-designed livestock export vessels now replacing older vessels in the Livestock Express fleet as part of a major modernisation program being undertaken by the Vroon family.

The new “G-class” vessels, the first of which was delivered in 2013, are built with the welfare of both the livestock cargo and crew at the centre of their design.

They vary dramatically from new vessels of similar size in several ways.

They are faster – afforded both through their unique wave-piercing bow design and more powerful engines – in order to deliver livestock from the port of loading to destination as quickly as possible. These ships can safely travel at over 16 knots per hour in heavy weather compared to around 13-14 knots for comparable vessels transporting cargo.

They are also far more sophisticated, with engine and power redundancy systems in place to ensure adequate ventilation, feeding and watering in the event of a mechanical failure.

With a range of 18,000 Nautical Miles, they also bring significant fuel efficiencies. Where similar sized vessels could complete three Darwin to Jakarta journeys and back again on one refuelling, this vessel can effectively do five return journeys on the same amount of fuel.

A new feature introduced on the final three G-Class vessels being delivered this year is a new top-deck and cross-deck loading facility. 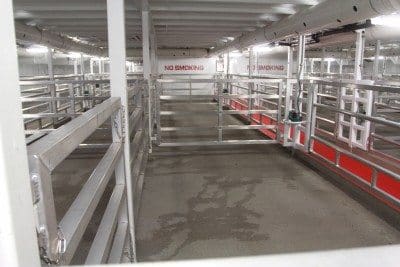 Livestock pens on the Greyman Express.

Earlier generation vessels typically load at around mid-deck level. When tides ease and loading doors drop below the level of dock loading ramps, loading has to stop until the tides rise again. Such delays result in significant additional costs for exporters. The ability to load from the top deck means that delays to loading caused by tidal movements at port are far less likely to occur.

The G-class vessels can carry about 4000 feeder and/or breeder cattle or about 2500 slaughter weight cattle.

The sleek wave-piercing bow design gives the vessels greater stability in the water, which not only results in greater speed and fuel efficiency but increased animal comfort, enabling animals to be delivered in a healthy condition.

Reinforcing the animal welfare standards of the new vessels, Livestock Express managing director Paul Pistorius said the five G-Class vessels delivered in the past two years have now carried over 500,000 cattle, and in that time there have only been 118 mortalities – a rate of 0.0002%, much lower than natural mortality rates on-farm.

“That is an exceptionally low rate which just goes to prove that the new design we have made on this vessel really does work, and we are very, very proud of what we have achieved,” Mr Pistorious said. 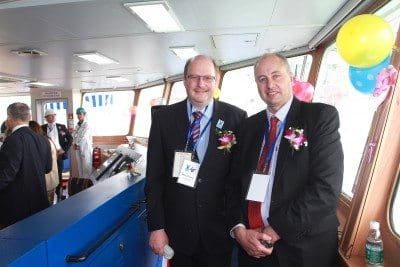 In delivering his speech to the gathering Frontier Managing Director Hamish Browning said the event was a major milestone in the company’s development.

“Just on two years ago Vroon backed our new company by chartering us the Shorthorn Express, today we move forward together in this relationship with the delivery of the newest and most advanced of the G Class vessels, the Greyman Express”.

Many of Frontier International Agri’s livestock export customers from Indonesia, Vietnam and China were in the audience at the launch event.

More news from Beef Central’s recent visit to China will follow in coming days. To keep up to date register to receive our free daily news emails here