They look like something from a futuristic science-fiction movie, but these state-of-the-art vessels are already at work in international trade routes delivering Australian livestock to the world.

Four ‘new generation’ livestock carriers purpose built for Dutch company Vroon have been introduced to Australia’s livestock shipping fleet since early last year and another three are set to commence operation in the next year or so.

The vessels are designed specifically around animal welfare, with ventilation, watering and feeding facilities all exceeding Australian Maritime Safety Authority (AMSA) regulations, which are the most stringent standards governing livestock shipping vessels in the world.

In 2011 Vroon contracted the Cosco Shipyard in Guangdong, P.R. China to build six new-design livestock ships for an estimated cost of $28.25m each.

Henrik Nissen, who represents Dens Ocean, the company which oversees the commercial management of Vroon’s fleet of livestock carriers, said four of the vessels are now shipping cattle from Australia and New Zealand.

The first two vessels, the Galloway Express and the Ganado Express, were launched in April 2013 and May 2013, chartered to Elders and Austrex respectively.

The Gelbray Express was launched in February 2014 under a charter to Landmark Global Exports, while the Girolando Express was delivered to Austrex in May 2014.

A further two vessels, to be named the Gloucester Express and the Greyman Express, are scheduled to be delivered during the second half of 2015.

A seventh livestock carrier was ordered by Vroon last month.

It has already been chartered to one of the major Australian livestock exporters under a tailor-made charter agreement, which will commence as soon as the vessel is delivered by Cosco to Vroon, expected to occur some time in 2016.

The Australian exporters who will charter the three ships yet to be delivered have not been identified. 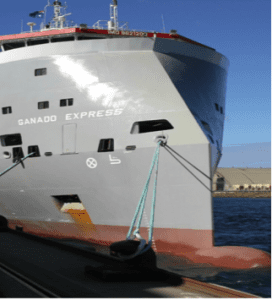 Each ship has a cargo capacity of approximately 4500 square metres and a cruising range of 18,000 nautical miles. That is sufficient for a voyage from Brazil to China and back without refuelling.

They can ship approximately 4000 head of cattle at 350kg/head.

Deck space of about 495 square metres plus 1200 cubic metres of silo space is available to store fodder.

Additional facilities include auxiliary engines and two fresh water generators, each with a capacity of 100m³/day.

Ventilation systems can renew the air in the livestock areas up to 45 times an hour.

Austrex has now expanded its fleet to a total of five ships after taking delivery of the Ganado Express last year and the Girolando Express earlier this year.

Austrex managing director Justin Slaughter said the adoption of wave piercing technology together with advanced monitoring and ventillation sysems enabled Austrex to provided the highest standards in animal welfare and a high quality service for suppliers and customers.

“We are very excited to be a part of the growing live export industry which helps support and supply communities around the world with much needed meat and dairy protein.”