LEANING on the edge of a concrete feed trough with his arms folded across his chest, Ben Giblett tips his head back slightly while contemplating his answer.

“What’s it like to work under the sheds?” he murmurs.

“Well, it’s been good when we’ve had 1.5 metres of rain during the past three months,” he laughs.

Then, as if to reiterate the point, he turns to face the empty yard and points in the direction of a steel structure with a small amount of hay poking out the sides.

“See, basically, everything is dry, the cattle, the feed, pretty much everything,” he said.

As the manager of the pre-export livestock quarantine facility at Berrimah, on the outskirts of Darwin in the Northern Territory, Ben knows that working in the wet is just part of the job. 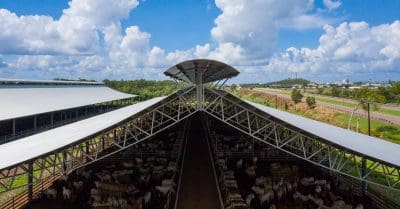 Without the shelter of the Entegra Ridgeback sheds, he said the yards would become “mud…slop” after the seasonal downpours.

“Then the hardest part is cleaning the pens out in the middle of the wet,” he explained.

“Other yards have to be proactive and clean at the start of the wet, but here, we can clean as we go.  It’s dry so we can get machinery in here all year around.”

This wet season was the first true test for the Ridgeback sheds, as Darwin, from October last year to February this year, was drenched with falls averaging 32 per cent more for this period.

According to the Bureau of Meteorology the 1558.8mm of rain recorded during this time was the most since 2016-17.

It’s nearly been three years since the Northern Territory Livestock Exporters Association (NTLEA) upgraded its pre-export quarantine facility, known as the Berrimah Export Yards, thanks to the assistance of a Territory Government grant.

These yards hold up to 4000 cattle – depending on their size – and operate year-round. 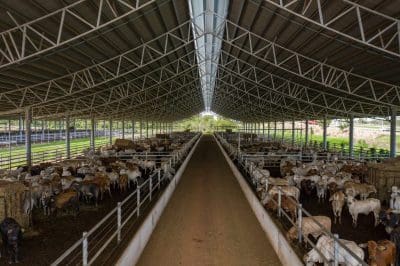 Since the construction of the sheds there’s been up to 80,000 cattle quarantined at the Berrimah yards, prior to export to South East Asia. 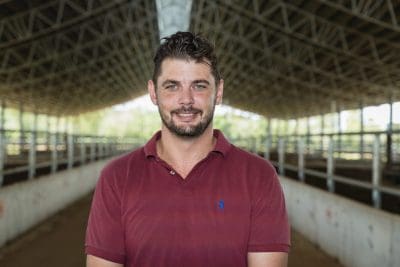 “We are legally required to have cattle in a pre-export facility prior to them being exported,” Will Evans (right), who was the CEO of NTLEA for three years before taking on his current role as CEO of the Northern Territory Cattlemen’s Association in late March.

“The cattle come off stations, they come into the yards and they are legally required to be there for two clear days, which means we aren’t allowed to handle them. They can’t be dipped; we can’t be putting tags in them. There has to be two days of absolute rest.”

At Berrimah, cattle are in the yards for an average of four days, and among a variety of health treatments and clearances, much of this time is transitioning them onto the feed they will eat during their sea voyage.

A combination of pellets and hay make-up the diet of cattle on ships and getting them to eat this new ration has been made much easier since the construction of the sheds.

“Anecdotally, we observe that the cattle certainly do well under the shed, they eat a lot and drink a lot and those are the characteristics we are looking for,” Mr Evans explained. “We want to see that they are calm, and we want to see them go onto feed very quickly.”

Moving through the supply chain

The Berrimah Export Yards are one of up to 10 Northern Territory pre-export facilities. They are the only facility in the Territory with sheds.

The Northern Territory government gifted the Berrimah site to the export industry 36 years ago, prompting the establishment of the not-for-profit organization NTLEA. 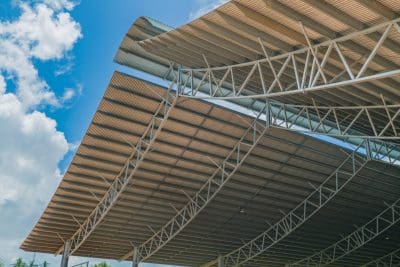 This facility processes up to 15 per cent of the total cattle exported from the Darwin Port.

Beef exports, for breeding and slaughter, were worth a total of almost $1.7 billion during 2019-20, according to the industry research, development and extension organisation LiveCorp.

Cattle are trucked to the Berrimah Export Yards from right across Australia’s north, including the top of Western Australia, central and northern Queensland and north of Tennant Creek in the Northern Territory.

Once at the yards, the cattle are the property of the exporter. Managing the animal’s welfare and comfort during this time is crucial.

“The key performance indicator for what happens here are the weights,” Mr Evans said.

“Commercial sensitivities” surrounding data from the export facility meant NTLEA wasn’t able to provide specific information about cattle weight gain, but Mr Evans assured the Ridgebacks were providing a return for the investment.

“I know the exporters have been really happy with this facility, especially during the wet season because of the challenges around managing the conditions.,” he said.

The industry on show

The sheds at Berrimah Export Yards were always planned to be a “shop-front to the industry”, according to Entegra director and salesman Charles McCalman.

Charles worked with the former NTLEA Chief Executive Stuart Kemp in the initial stages of planning.

“Then, the Ridgeback was an innovation for the industry,” he said.

“NTLEA could stand-up and say we are providing our cattle with the best infrastructure and most advanced technology to provide better conditions for our cattle.”

The Ridgeback is a patented climate-controlled design with 20 per cent more air exchanges per hour compared to traditional Entegra sheds.

The Berrimah Export Yards upgrade generated a lot of interest in Darwin and throughout the live export and beef industries.

“This facility serves as a showcase for the industry,” Mr Evans said. “It shows what can happen when Government and the industry work together and commit to animal welfare and it sets the bar right at the top of what we can be doing with cattle in the Northern Territory.”

The sheds have also provided NTLEA with an opportunity to expand the Berrimah facility.

“This shed does give us some options around diversifying what we do,” Will said. “While this facility must only be used for export cattle, within these parametres we can also conduct trials on these cattle, whether it is scientific trials or custom feeding for cattle, it gives us a lot of options.”

Back in the shade at the export yards, facility manager Ben has plenty of ideas about various trials and business ventures for the Berrimah site.

“There’s custom feeding,” he said. “Where producers bring in cattle and feed them in the shed, they gain weight and that’s their margin. We could also look into water supplementation.”

For Ben, who’s worked in the live export industry for more than a decade, he sees adding shade and shelter to a pre-export quarantine facility as part of the industry’s evolution and something he hopes will be embraced by the next generation.

“The youth today are looking to improve the standing of everything in agriculture,” he said “We have got to be able to do that in the export side of things as well.

“Getting it right here, having them on the same pellets as the ship before they go and having them happy and content, is the key to a good shipment.”

South East Asia wants our cattle, but Australia needs to increase its production if it has any hope of quenching this market’s thirst for red meat.

“Live export is very much a demand driven market,” Mr Evans said during an interview in March. “One of the things we have noticed is the demand in South East Asia is always increasing. At the moment, what we need to do is find a way of sourcing more cattle.”

A few changes would be required to meet the growing South East Asian demand for Australian beef cattle, according to Mr Evans.

“Really it becomes about increasing production,” he said.

Last financial year, Indonesia was Australia’s largest volume beef live export customer taking 47 per cent (611,231) of the total exports. Exports from the Darwin Port accounted for about 30 per cent of the total nearly 1.3 million cattle exported from Australia during 2019-20.

Mr Evans said live export was “a pillar” of the Northern Territory economy, as it was worth about $1.3 billion a year – depending on export numbers – employing about 10,000 people across northern Australia each year.

The NTLEA Berrimah Export Yards is one of up to 10 pre-quarantine facilities in the Northern Territory and is the closest to the Darwin Port. It supplies up to 15 per cent of the cattle exported from Darwin.