NORTHERN export cattle prices have softened from record highs, albeit slightly, as the annual nexus arrives between new season supply coming on and the passing of the traditional pre-Ramadan rush on demand in Indonesia. 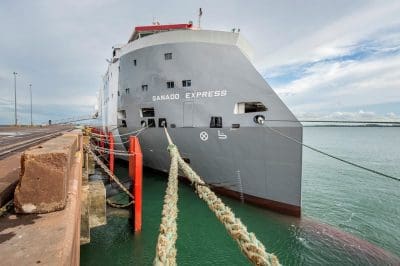 File picture of the Vroon Livestock Express G-Class 4500 square metre livestock carrier the Ganado Express, launched in 2013, which completed a run cattle feeder cattle from Darwin to Jakarta in the first week of April.

Weekly pricing for feeder steers to Indonesia out of Darwin is being quoted at around 420c/kilogram, down from the 430c/kg levels that have predominated in recent months.

Exporters have been offering lower money in anticipation of supply increasing and post-Ramadan demand subsiding, but prices are reported to have been holding relatively strong to date, helped by continued demand from lotfeeders and restockers in Queensland.

Shipping activity from Darwin to Indonesia was strong through March as Indonesian feedlots were in the final stages of stocking up in preparation for the post-Ramadan Labaran feasting period, which starts in one month’s time on May 12.

Trade reports indicate that feeder cattle prices to Indonesia have eased by 10-20c in recent weeks now that the rush of cattle imports for Labaran has passed, with export buyers now under less pressure to secure suitable stock in the knowledge that bigger numbers of cattle will soon start coming forward with dry season musters now well underway across Australia’s north.

Religious festivals have also had some influence on supply dynamics in Australia this year, with an earlier-than-usual Easter pushing back the start of first round musters until later in April than normal.

However there were also reports of solid pre-Easter exports of lighter feeder cattle out of the Katherine and Victoria River areas this year, with producers happy to take the record high prices on offer as exporters sought to fill pre-Labaran orders from Indonesian importers.

Some exporters have put out lower prices in the 400c-410c/kg range in anticipation of the increased supply coming forward, but continued demand from restockers and lot feeders is providing continued competition and reportedly pulling some stock back into Queensland, in addition to culled cows going to southern processors.

One western Queensland producer commented to Beef Central that there have been quotes about as high as 450c ex-Longreach for feeder steers that would normally go on ships, which is pulling some NT and Gulf cattle back in that direction.

There has been reduced shipping activity to Vietnam in the past few months, but trade comments on what effect this has had on price levels remain mixed, with reports that while demand is still strong there is also clear importer resistance to current price levels, which has seen prices soften to around 350c/kg, down from 380c/kg in recent months, with forthcoming supply increases expected to keep prices at a lower level. However another trade source added that there was some talk that both exporters and lotfeeders having to bid higher in the past week to get suitable cattle, so some contrasting signals on NQ price levels for Vietnam cattle remain.