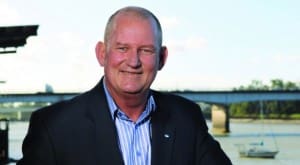 Less than two weeks into the job, Queensland’s new agriculture minister is already drawing political heat for his stance against a proposal to launch a live export trade out of Port Alma near Rockhampton.

Former long-serving soldier and army officer Bill Byrne has been the ALP member for Rockhampton since 2012, and was named as the Minister for Agriculture, Sport and Racing following newly elected Queensland Premier Annastacia Palaszczuk’s surprise election victory earlier this month.

Last year when moves were flagged to relieve an oversupply of cattle relative to a shortage of kill space in Central Queensland by starting a live export trade from Port Alma, Mr Byrne as the local member for Rockhampton was a vocal opponent of the plan.

As quoted by the Rockhampton Morning Bulletin at the time, he said claims that a live export market out of Port Alma would benefit producers were “nonsense”, and, while price issues would improve dramatically in short to medium terms, there would be no financial advantages in the long run.

He said the proposal would threaten a considerable number of meatworks jobs in Rockhampton and as a result he could not support it.

“I am all about defending and creating local jobs, rather than exporting them overseas,” he was quoted as saying.

Last week, in his first public comments as the new minister for agriculture, Mr Byrne was again quoted by the same paper as saying that while he supported the live cattle trade under appropriate circumstances, he believed it would threaten the viability of the meat processing and value-adding industry in Rockhampton.

“The driving force behind live cattle is the notion that producers would get a price advantage,” he said, according to the Rockhampton Morning Bulletin.

“There wouldn’t be a price benefit and it would directly threaten full-time jobs… I’d oppose it for that reason.”

His comments triggered a stern rebuke from new opposition leader Lawrence Springborg, who has challenged Ms Palaszczuk to restore confidence to the live export industry after it was heavily impacted by a federal Labor government decision to halt live exports to Indonesia in 2011 following incidents of animal cruelty.

“The premier needs to come out in support of the live cattle export industry,” Mr Springborg told AAP this week.

“She has to support it because it’s a vitally important industry and we saw the devastation that came from the previous shutdown.

“It’s important and people would expect the agriculture minister should be supporting it not opposing it, and they would be very interested to know if the premier shares that view.” The uproar prompted Mr Byrne to release a statement to media outlets yesterday, claiming his views had not been accurately represented by media, and stating the he is “a long-time supporter of live cattle exports”.

“Last week I was asked to comment about a proposal by the former Member for Keppel, Bruce Young, to export live cattle from Port Alma,” he said in his statement.

“Unfortunately media reports have not given a clear representation of my views.

“The facts are that I have been a long-time supporter of the live cattle industry and I fully recognise its value to the beef sector.

“Queensland is a world leader in cattle and beef production, with live cattle exports from Queensland ports reaching almost 200,000 head in 2013/14.

“I support diversity in the cattle sector and as Minister I will work with both exporters of live cattle and meat processors to maximise economic opportunities for all.”

However he said he would continue to oppose the establishment of a live cattle export facility at Port Alma.

“In response to questions from a journalist in Rockhampton I commented that on the balance of information I have received, and on the evidence presented to me by meat processors in Rockhampton, I cannot support the establishment of live cattle export via Port Alma.

“I am not satisfied it is a viable economic proposition.

“I again make it clear that I strongly support live exports and that my views on the Port Alma proposal do not diminish my support for the live exports industry for Queensland producers and graziers in any way.

“Up to 2400 jobs in my electorate of Rockhampton are dependent on the meat processing sector and I can’t support any proposal that might place those jobs in jeopardy.”

An experienced livestock agent in Central Queensland contacted by Beef Central this week said he believed there was strong support from CQ producers for the creation of a live export trade out of Port Alma, and the only thing required for the trade to start was for the economics to stack up in favour of an exporter running a boat to the port.

The infrastructure and certifications required for the trade to start were all but already in place, he said.

The agent, who asked not to be named because of the commercial sensitivities surrounding the issue, did want to make the comment that he believed it was “nonsense” for the new minister to suggest that the additional competition of a local live export trade out of the Port would not produce a price benefit for CQ producers.

“I would ask somebody to give a judgement about where the processing sector would have let prices go last year if there wasn’t a live export industry competing with them for cattle?

The agent said cattle were currently being trucked from as far south as Roma and Warwick for the boat trade from Townsville, which further supported the economics of running a ship out of Rockhampton.