NEW footage showing four Northern Territory steers being roped, forced to the ground and having their throats cut without stunning has triggered fresh outrage against the live export trade and more questions about why exporters continue to lose control of Australian animals from supposedly secure customer supply chains. 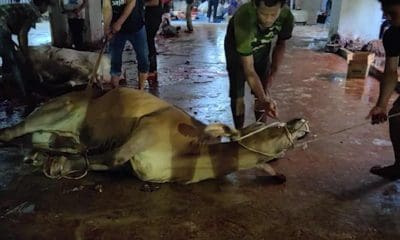 A still image of video footage published by The Guarduan.

The footage is understood to have been filmed near Medan last month during the muslim festival of Qurban, also known as Eid al-Adha, a single day annual event when hundreds of thousands of cattle, sheep and goats are slaughtered at mosques as a religious sacrifice (see earlier article explaining Qurban here).

Cattle imported from Australia are not suitable for slaughter for Qurban for a number of reasons, and nor are they permitted under the Export Supply Chain Assurance System to be slaughtered outside Australian Government approved abattoirs in Indonesia.

This latest furore has arisen for the trade as new Federal legislation introduced to appoint an independent Inspector-General of Live Animal Exports to oversee regulation of the industry passes the Senate.

On August 13 the Department of Agriculture announced a new investigation on its website after it received a report of non-compliance with ESCAS requirements involving cattle exported to Indonesia, involving animals observed outside the approved supply chain and non-compliant handling and slaughter. It identified Animals Australia as the source of the complaint and continues to list the investigation as still in progress.

Media reported having also been given the footage by the group on Wednesday.

WA based exporter International Livestock Exports (ILE) has identified itself as the exporter responsible for the export of the cattle in the footage.

In a short statement to Beef Central today ILE said it takes its ESCAS responsibility seriously.

“Once informed of the breach ILE took immediate action to identify the cattle involved, and has since taken the remediation action to cease supply of Australian animals to the abattoir involved.”

In comments to media ILE yesterday said there were 140 separate facilities in its approved supply chain and the cattle had been illegally sold outside the supply chain from one facility, which it said it suspended as soon as it became aware of the issue.

The RSPCA said the footage was highly reminiscent of the videos that led to the Federal Government to temporarily banning live exports to Indonesia in 2011, said the footage would “send a shudder down the spine of every northern cattle producer, who expect the welfare of their cattle to be safeguarded under the Exporter Supply Chain Assurance System’.

The animal welfare group is now demanding the Federal Government undertake an urgent review into the management of ESCAS.

It said the latest incident served as another stark reminder of the inherent risks of exporting live animals into foreign markets over which the Australian Government has no control.

The RSPCA said the fact ILE has 140 facilities approved in Indonesia alone was “astonishing”.

“Approving multiple slaughter facilities just ramps up the risk of inhumane slaughter and handling and leakage,” it said in a media release.

The Australian Livestock Exporters’ Council (ALEC) all Indonesian exporters immediately undertook investigations into their own systems when the non-compliance was brought to their attention.

It said the exporter has identified the facility the cattle filmed were removed from and the facility has now been suspended by all Australian exporters that supply it.

Exporters were also reviewing other supply chains in light of the incident.

“We have also contacted the producer that supplied the cattle, informing them of these measures,” ALEC CEO Mark Harvey-Sutton said.

In a statement ALEC said it was taking this matter very seriously and would continue to assist its members and the Department of Agriculture throughout the investigation.

“ALEC has reviewed the footage and the treatment of the cattle at the non-approved facility was unacceptable,” the statement said.

The exporter is taking steps to engage the facility outside the approved supply chain where the cattle were slaughtered in order to ensure that this does not occur again.

“ALEC members have adopted a Code of Conduct and have implemented a Conduct Committee comprised of independent eminent Australians that will consider any potential breaches of this code.

“The code is compulsory for all members and contains sanctions for breaches.

“Consistent with this, ALEC and its members have instigated action under the code. “It is imperative that ESCAS is upheld in market throughout the entire supply chain, that any breaches are identified and resolved and that Australian animals are treated appropriately.

“As an industry we are committed to upholding the highest standards of animal welfare throughout the entire supply chain.”

Mr Harvey-Sutton said circumstances of the trade were such that a self-report was not always possible.

“We welcome issues being brought to our attention immediately, as this will expedite the protection of animals in a non-compliant supply chain,” he said.

“We have written to Animals Australia (AA) who identified the breach notifying them of the actions we have undertaken to address the situation.

“We have requested that if AA are in possession of any further information, that they come forward immediately so that the welfare of animals can be protected.”

The RSPCA also said it was concerned about a trend in ESCAS non-compliance investigations where blame is being shifted to the in-market abattoir or facility, “which was then periodically suspended to allow the exporter to simply move to the next abattoir down the road”.

“At the end of the day, the exporter must be held accountable for such breaches as it is ultimately their decision as to what supply chains the animals are sent into. Better yet, a transition to chilled meat exports would mean Australian animals are slaughtered on Australian soil, instead of being subjected to gruelling journeys only to meet an even more gruelling fate at slaughter,” the RSCPA said.

ILE is connected to Perth based Emanuel Exports, which had its export license cancelled following a Departmental investigation in 2018 into footage of Australian sheep suffering heat stress and dying aboard the Awassi Express en route to the Middle East. The Federal Department of Agriculture issued ILE with a show cause notice in October last year.