Israel has been one of Australia’s fastest growing markets for live cattle exports in 2019, but the trade is facing renewed calls for its closure as a result of new footage and images released in recent days by animal rights activists. 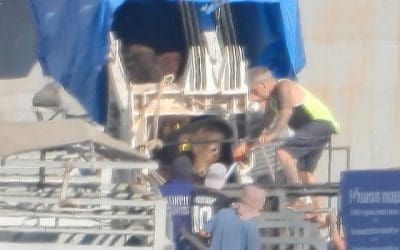 On Saturday the Times of Israel published images captured by the group “Israel Against Live Exports” of workers said to be unloading Australian cattle with electric prodders as they disembarked from the vessel Maysora at the port of Eilat.

The group also posted footage to its social media pages showing dozens of dead and bloated cattle, which it claimed were Australian cattle aboard the same vessel which arrived in Israel earlier this month.

The Times of Israel reported that the ship carrying 20,000 calves and lambs from Australia arrived in Eilat on the morning of Friday, June 8. It said workers began removing the animals from the ship Friday night, but didn’t finish for five days, stating that the animals onboard were left in hot, crowded conditions.

The report quoted Israel’s Agricultural Ministry stating that 34 of the calves died onboard, and 30 died after disembarking.

A Department of Agriculture spokesperson told Beef Central today the Department is working to ensure animal welfare is central in the export of live animals.

“The Department is aware of the footage related to treatment of cattle at discharge and is looking into the matter, including whether any breaches of ESCAS may have occurred.

“We are seeking additional information from the exporter to clarify allegations of mortalities post discharge.

“For the voyage, sheep and cattle mortalities are well under the reportable mortality level of 1 percent.

“The department notes that the vessel was accompanied by an Independent Observer, who reported that there were no abnormal or unexpected animal health or welfare issues during this voyage or during discharge.

“In addition to the report from the Independent Observer, all mortalities from this voyage will be reported to the Australian parliament and published online.

The RSPCA released a statement this morning saying it has lodged a formal complaint regarding the incident with the Department of Agriculture (more below).

Israel has been one of Australia’s fastest growing markets for cattle exports in 2019, believed to taken around 40,000 through until the end of May.

That compares to 60,000 cattle shipped from Australia to Israel for the entirety of 2018.

Israel imports cattle and sheep from several countries in addition to Australia, with its total imports in 2018 totalling 685,000 calves and lambs, according to the Times of Israel.

In a statement provided to Beef Central the Australian Livestock Exporters’ Council said it was aware of the concerns raised about the treatment and condition of Australian cattle during disembarkation in Israel last week, and said it was in direct contact with the exporter involved to better understand the situation.

“Delays during unloading in Israel were outside of the exporters control, with extra feed and care taken to ensure that no animal welfare incidences occurred.

“ALEC understands that the cattle sustained no injuries when disembarking and the total mortality rate was 0.53pc, well below the 1pc level which would require reporting to the regulator.

“ALEC will continue to work closely with the exporter and the Australian Government regarding these concerns.”

In a statement released today the RSPCA Australia said it has lodged a formal complaint with the federal Department of Agriculture in response to the Maysora footage.

The RSPCA said the footage and images showed poor handling practices including excessive electric prodder use and workers standing on the backs of cattle and painfully twisting the tails of cattle being offloaded from a vessel operated by Livestock Shipping Services (LSS) in Israel.

“These practices are forbidden under Australia’s mandatory Exporter Supply Chain Assurance System (ESCAS), which was created more than eight years ago to stop this routine cruel treatment of Australia’s animals overseas.

“At least 64 cows and calves are reported dead, with shocking images showing decaying carcasses on board the ship as well as in the Israeli quarantine facility.

“Despite the overwhelming scientific evidence and community opposition, live exporters continue to send Australian animals into the searing heat and humidity of the Middle Eastern summer where heat stress, death and disaster are inevitable.

“The RSPCA continues to urge the Australian Government to act on the science and evidence, and stop exports to the Middle East between the highest risk months of May to October.”

Last year, Israel’s parliament – the Knesset – green lighted a bill in its preliminary reading to stop the live transports of hundreds of thousands of lambs and calves from Australia and Europe to Israel each year.

The proposed legislation seeks to gradually reduce livestock numbers being imported into Israel and to stop them completely within three years, moving entirely to the import of chilled meat.

A ministerial committee gave the go-ahead for the bill last July, after which Prime Minister Benjamin Netanyahu uploaded a photograph of a calf covered in excrement and wrote, “We approved at the Knesset Committee for Legislation a bill to stop the live shipments to Israel.

“We have to properly correct the great pain being caused to animals.”

Last July, 228 lawyers signed a petition calling for live shipments to be stopped, saying they contravened legislation on animal rights.

Last year then Australian agriculture minister David Littleproud travelled to Israel to lobby for the country to continue to take live animals from Australia.

Mr Littleproud said Australia had been talking with Israel “for some time” about why a ban was not good for Israeli consumers as well as what alternatives there may be to a ban.

He said Australia was the only country in the world which has standards which monitor animal welfare right through the live export supply chain.

The Australian Standard for the Export of Livestock enforces animal welfare from farm to vessel. The Export Supply Chain Assurance System enforced standards from offloading to slaughter, including through feedlot and abattoir facilities overseas which receive Australian livestock. Exporter supply chains need to be approved by the independent regulator.

Mr Littleproud described Australia’s system as “the leading model for the export of livestock”.

“The live trade can be done by the right people, the right way,” Minister Littleproud said.