After surging by more than 60 percent last year, Australian live cattle exports are set to ease back by 30pc in 2015, according to Meat & Livestock Australia’s annual projections released this morning. 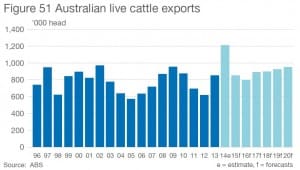 The main reason for the year-on-year decline according to MLA will be tighter Australian cattle supplies in the wake of the unmatched turn-off that occurred during 2014.

Further out, MLA projects that live cattle exports will hold relatively firm in coming years through to a level of 875,000 head in 2017, as turnoff numbers remain limited by herd rebuilding programs, before slowly increasing again as the national herd expands.

On the demand side, MLA says fundamentals across all markets are likely to remain strong, assuming uninterrupted market access.

However, at the same time Egypt went from receiving no cattle in 2013, to 27,900 head over the period – offsetting the decline to Israel.

Large numbers of predominantly dairy cattle were exported to China during the first 11 months of 2014, with shipments at 97,027 head up 57pc year-on-year.

If market access for feeder and slaughter cattle exports from Australia to China is granted this year as expected, numbers to this market will also increase 2015.

Indicative feeder steer prices from Darwin have been strong over the course of the year, with most quotes closing 2014 in excess of $2/kg lwt.

In terms of sourcing cattle, MLA says the large numbers of cattle turned off in the past year has seen exporters venture further south to secure lines.

“This is likely to remain the case until first round mustering begins this year,” MLA states.