MIDDLE East live sheep shipments will be allowed to continue this year under tougher stocking, animal welfare and penalty rules, against the advice of Australia’s peak veterinary body and the RSPCA. 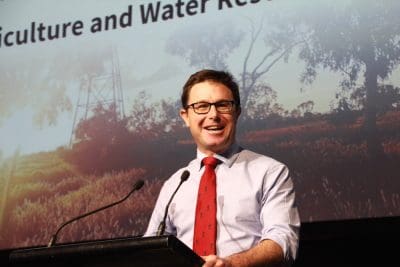 Minister for Agriculture and Water Resources David Littleproud this morning released the much-awaited McCarthy Review report prompting support from the industry, but criticism that it and the government has ignored animal heat stress principles.

Changes announced by Mr Littleproud include:

An immediate reduction in stocking densities for Middle East shipments by up to 28 percent, with sheep getting 39pc more room under an allometric system

A halving of the current reportable mortality level to 1pc; meaning if more than 1pc of sheep die it must be reported immediately and investigated.

Australia’s independent regulator will move to an assessment model based on animal welfare rather than mortality using a heat stress method that can potentially reduce stocking densities by 18-79pc.

An independent observer on all future sheep or cattle shipments during the northern summer reporting daily to the regulator.

Introduction of a Bill increasing penalties and creating a new offence of profiting from poor animal welfare outcomes.

Overhaul of live export system will be delivered – Littleproud

Mr Littleproud said the McCarthy Review calls for a major overhaul of the live sheep trade during the Middle Eastern summer.

“It will be delivered; the live sheep export trade is in for significant change,” he said.

“We accept all 23 recommendations made by Dr McCarthy, noting that further testing and consultation is needed to understand and implement Recommendation 4 on Heat Stress Risk Assessment.

“Dr McCarthy recommends the regulator must ensure the integrity of the system. It must nail those who do the wrong thing.

“The independent regulator tells me it will progressively implement the McCarthy recommendations subject to further work on the heat stress risk management recommendations.”

Mr Littleproud said he will introduce a Bill increasing penalties and creating a new offence of profiting from poor animal welfare outcomes. Under the offence, a director of a company could face 10 years prison or $2.1 million fine. An individual convicted under the same offence would face 10 years and $420,000 fine.

“For a company, the fine will be $4.2 million, three times the benefit gained, or 10 percent of the company’s annual turnover, whichever is greater.

ALEC independent chairman Simon Crean welcomed the McCarthy Review findings, including the placing of independent observers on livestock voyages and the changes in the way the regulator measures animal welfare, beyond a model based only on mortality numbers.

National Farmers Federation president Fiona Simson said the review has inserted new regulation into the industry and given a new way of looking at animal welfare standards, stocking density and heat stress.

“This is a step forward; however, there is lots more to do.”

Ms Simson said she could not give the public a guarantee that sheep would not die on ships “en masse” during the northern summer.

“No I can’t, but what we have in place now is a much greater transparency.

“We have a new model, we have independent observers on board, we have transparency in terms of the vessels,” she said.

“What I can give the public a guarantee about is that it is a better system that we currently have.”

Cattle Council of Australia released a statement saying it also welcomed the livestock export reforms announced by Minister Littleproud today, which would also have relevance to cattle shipments, including measures requiring that independent inspectors be on board all livestock export voyage.

The council said it was currently consulting with producer members, exporters, welfare groups and the Australian Government as part of the review into the Australian Standards for the Export of Livestock (ASEL), which aims to strengthen existing welfare safeguards on livestock vessels.

“We look forward to ongoing consultation with other supply chain participants and the Australian Government to ensure cattle producers maintain access to a diverse range of market options and can continue to help meet the food security needs of our trading partners.”

“These recommendations completely ignore the science, and are not enough to reduce the risk of either consistent harm to animals or the catastrophic conditions we’ve seen previously,” she said.

“It’s frankly extraordinary that this review will allow May to October voyages to continue, taking winter-acclimatised animals into temperatures of more than 40 degrees, and humidity of up to 80 percent.

“There’s no stocking density limit that can protect sheep in those kinds of conditions; a single sheep standing on a deck will suffer and can die under those heat and humidity levels.”

Dr Jones said the recommendations require sheep be given 11-39pc more space only during the hottest and highest-risk time of the year.

“For a 50kg sheep, 39 per cent more space equates to around 28% reduction in stocking density.

“To be clear, a 30pc stocking density reduction throughout the remainder of the year is the absolute minimum required to give us any chance of avoiding the very outcomes seen in the Awassi footage, and to allow all sheep to lie down and to easily access food and water.”

The Australian Veterinary Association’s submission to the McCarthy Review also recommended that space allocation for a 40-60kg sheep be increased by at least 30pc throughout the year, but it said irrespective of stocking density, thermoregulatory physiology indicates that sheep on live export voyages to the Middle East during May to October will remain susceptible to heat stress and die due to the expected extreme climatic conditions during this time.

“Accordingly, voyages carrying live sheep to the Middle East during May to October cannot be recommended,” the AVA said.

Vets Against Live Exports spokesperson Dr Sue Foster said Mr Littleproud has chosen to ignore the recommendations of the AVA, to avoid serious problems with heat stress in the northern summer.

“It is clear to us both from the science and from the review carried out by the Australian Veterinary Association that increasing space allowance will at best have a minimal effect on the suffering and mortality experienced by sheep during northern summer voyages.”

“He seems to think it is the point when animals go to getting rid of heat by breathing faster.

“This is completely wrong, in our view,” he said.

Dr Foster said the threshold is where a sheep is unable to get rid of heat, whether by breathing faster or panting, such that its body temperature rises uncontrollably, with disastrous consequences for welfare and ultimately leading to death.

“This (threshold) definition is how the industry, and the International Union of Physiological Sciences (IUPS) has set this level.

“As we noted in VALE’s 2014 review of heat stress in live export (by Caulfield and colleagues), the IUPS actually calls this level the ‘upper temperature survival limit’,” she said.

“This clearly expresses the idea that if body temperature increases out of control, the animal will die.”

Dr Foster said Dr McCarthy seems to think the ‘upper temperature survival limit’ is the point when animals go to getting rid of heat by breathing faster.

“This is completely wrong, in our view.”

Dr Foster said the other major error he has made is to misquote the relevant science on space allocation.

“He says an increase in space allocation ‘will assure the health and welfare for sheep being transported to the Middle East during the northern hemisphere summer’.

“This shows a failure to understand that the calculation of necessary space allocation relates to the space necessary for a sheep to perform normal behaviours, such as lying down and getting up,” Dr Foster said.

“It is nothing to do with decreasing heat stress.

“Allocating more space will allow animals to move around more, but will do nothing to help with the heat stress they will inevitably encounter during a northern summer live export voyage, when temperature and humidity is so high, the animals simply cannot cool down.”

Dr Foster said VALE remained sceptical of whether the indepdent observers will in fact allow objective scrutiny of the obvious problems on these voyages.

“As we think the industry, with the collusion of the Minister’s Department, has a culture of suppressing the dreadful animal welfare suffered by these animals on Middle East voyages.”

Animals Australia investigator Lyn White said it was an appalling breach of faith with the Australian community for the Turnbull government to permit high-risk sheep shipments to the Middle East during the heat stress period, against the AVA’s recommendations and despite repeatedly promising to be guided by science.

“Instead of backing the science as promised, the Turnbull government is backing a compromised vet and a disgraced industry, effectively green-lighting its ability to inflict further suffering.”

“Had the AVA, or any independent expert, been engaged to conduct this review, the outcome would have been no shipments between May and October.”

She said the stocking density changes would equate to less than two A4 pieces of paper per sheep and will not prevent sheep from suffering severe heat stress.

By allowing the May to October shipments Minister Littleproud has gone from publicly censuring his own Department for regulatory failures, to actively condoning breaches of Australian law, Animals Australia said.

“Australians will never forget the sight of sheep gasping for breath, covered in excrement and literally cooking from the inside out.

“They will rightly feel utterly let down by this review and the Turnbull government’s preparedness to subject animals again to this abuse,” said Ms White.

Mr Littleproud has been his decision on live sheep exports would be predicated on science and fact not emotion.

‘‘You’ve got to stay the course, you’ve got to wait for evidence and then predicate your decisions on science, not emotion,’’ he said.

Mr Turnbull has also said during interviews that Australia should make decisions about its big export industries with the benefit of science and education.

“We understand that Australians expect and we should all expect that sheep, cattle or any livestock that is exported, should be done in a humane way, and we are going to ensure that it is,” he said.

“That is our commitment, that every step of the way we will be making for the benefit of the best scientific and visionary information.”

“Exporters acknowledge that when any exporter has failed to uphold its animal welfare obligations, compelling questions arise about the ethics of the entire livestock export industry,” Mr Crean said.

He said ALEC is commissioning an independent review of its governance structures, to make recommendations about a new ALEC Code of Conduct and an Independent Industry Reform and Ethics Committee.

“ALEC recognises it needs to overcome its past reluctance to fully engage with animal welfare groups.

“We acknowledge the role played by whistleblowers in calling out poor performance and that exporters must be more proactive in monitoring their own performance and demonstrate genuine accountability for any failures.”

“For that to occur, ALEC must proactively maintain an ethically sustainable trade in a way which gives long-term confidence to the public, Australian livestock producers and our food security-conscious customers overseas.”