WE’RE constantly told change is inevitable and we must keep innovating to stay ahead of the game.

But how to do that in a practical sense?

Keeping an open mind – and avoiding premature evaluation of an idea – is essential to the process, founder of Minds at Work, Jason Clarke, told the recent LIVEXchange conference in Townsville.

Another effective strategy is to “go back to square one” – if you could start your entire business from scratch, what would you do differently?

Jason Clarke specialises in helping clients throughout the private and public sector to ‘think again’ about their businesses to create effective change. 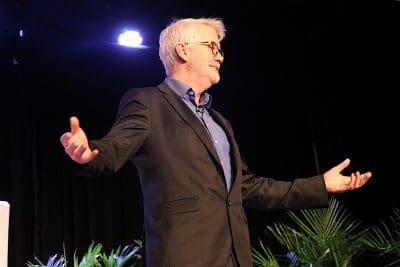 If he ever gets sick of doing that he could surely turn his hand to stand up comedy, evidenced by the fits of laughter he had the crowd bowed over in as he shared some extraordinary stories of real life business failures and triumphs.

Among them the astounding length of time it took after tinned food was developed for someone to invent a tin opener (48 years), the similarly astonishing delay it took for basketballers to realise a game could be eminently faster if the bottom was removed from the baskets, and why the McWrap perhaps wasn’t McDonald’s most well-thought out product line, something it took an 8 year old seconds to comprehend (hint: say the name out loud).

In the history of innovation and change, most of our ‘aha’ moments were accidents, and were not things we set out to find. Fortunately in each case, someone with a curious and open mind was there to identify that development’s actual potential – summed up by Louis Pasteur’s famous quote “discovery is an accident meting an open mind”.

Everyone wants to make things better, but most people do not want to change.

However, we can’t make things better by keeping them the same.

It is also common for innovation and growth to be stifled by reacting to people who offer new ideas by telling them not to change anything.

“Have you seen what that does to smart people? Have you seen how they disengage, and end up keeping their thoughts to themselves?” Mr Clarke asked.

“Every blocker I have ever met is a wounded idealist, it is someone who 20 or 30 years ago tried to shake this thing up, failed and is now discouraging other people from trying.”

Better is always different, he said, but different is not always better.

One example involved the replacement of paper towels in public bathrooms with electric hot air driers, a ubiquitous innovation which scientific research has found tends to dramatically escalate the amount of microscopic bacteria on people’s hands after they have dried them. 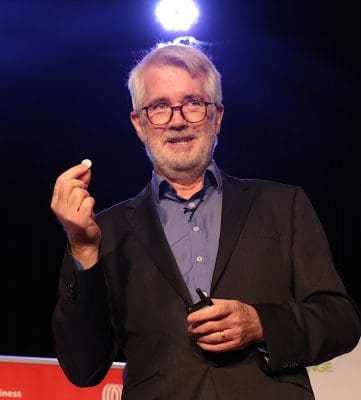 Consider, he suggests, the Australian 5c piece – virtually no one wants them, most machines won’t accept them, yet Australia mints up to 80 million of them a year. Depending on the price of copper and nickel, it can cost as much as 8c to make each 5c piece.

“Now I don’t remember my 80 million times table but I suspect that is money we could have done something really smart with,” he said.

Mr Clarke singled out the live export industry initiative to share stories directly from the industry to the public through the Sheep Collective and the Cattle Collective as an example of an industry being smart.

“We’re being transparent. That actually sounds like that is a smart thing we should be doing, as opposed to the dumb thing which is don’t tell anybody anything.”

Mr Clarke said a key to leading change lies in empowering other people to make change happen with us and for us.

There was a role for people of all types to play in this process – bright people and ideallists, people who are good at turning ideas into plans and to cook an idea into something that is workable, right through to the risk-sensitive catastrophisers who look for all the dangers. “Is that useful in that conversation? Yes you bet it is. It is just terrible when we go straight from ideas to how is that going to work.”

The only question that matters

“If you go straight from imagine to evaluate you have premature evaluation. It means you haven’t understood how this process works.”

Any industry that was asking the question ‘how can we sell what we have got?’ was in trouble, he said.

“Can you smell the death in that question?

“It is better to ask let’s find out what they want.”

The most useful question was “Let’s know what they’re going to need next.”

“What do they need next? It is the only question that matters.”

The closer any decision maker is to their customer, the more obvious what they need next is going to be. McDonald’s three highest selling menu items of all time were invented by burger flippers, the people in the organisation closest to the customers.

He said that while businesses all need to heed the voice of the next generation, it was also important not to underestimate the brains and intelligence and creativity they have already got within their teams.

He urged people to join “Generation Why Not?”, which they could do just by being curious and having an open mind.