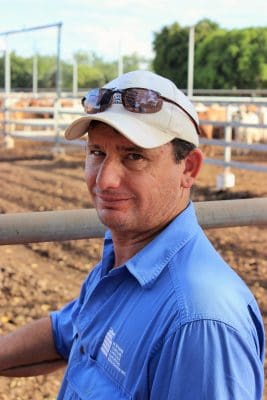 THERE is no denying Australia’s livestock export industry has again been put under the microscope in recent weeks.

Those of us lucky enough to work in the live export sector share the outrage stirred by instances of animal cruelty and the men and women of our industry are absolutely appalled by any inhumane treatment of any livestock – Australian or otherwise.

Unfortunately, it seems too easy for some of our critics to feed off the myth that our industry is comprised of greedy, faceless cowboy operators who exploit producers and livestock with reckless abandon, all beyond the reach of any form of effective regulatory control.

Far too rarely does mainstream Australia get an insight into the real men and women working in our industry because on the rare occasion that metropolitan media shows any interest in the trade, its brief portrayal is quite clichéd and plays on outdated stereotypes of northern Australia’s cattle industry.

Evidence of animal welfare failures, the likes of which seen in the past month with the release of Vietnamese abattoir footage, affects the entire livestock export industry directly. Exporters, producers and other livestock sector stakeholders take supply chain break-downs very seriously because it not only affects our businesses, but it also impacts on us personally.

The suspension of cattle exports to Indonesia in 2011 provided the Federal Government with an earth-shattering lesson on the dangers of having a one-dimensional view of an industry like ours. Scant regard was given to the wellbeing of the station families, stockmen, truck drivers and other professionals involved in the supply chain when that snap-decision to close the trade was made.

Notwithstanding the massive economic and human cost of that suspension, one hopes the Federal Government has learnt from the experience and is now more circumspect when it comes to our multi-faceted modern industry. One-dimensional views fueled by stereotypes are dangerous, which is why exporters and cattlemen have worked hard in recent years to listen to the concerns of animal welfare groups and better understand community expectations.

Sadly, this spirit of empathy often seems to be too much of a one-way street. Recent weeks have produced more compelling evidence suggesting too many members of the animal welfare lobby and city commentators continue to view both the live export trade and the northern cattle industry in far too simplistic terms.

The most disappointing aspect of this imbalance arises when the lines between animal welfarist and journalist seem to be blurred. Recent contributions from Sydney lawyer Tim Dick (link), The Age’s economics editor Peter Martin (link) and socialist commentator Andrew Hunter (link) have been prime examples of how geographical distance, naivety and seemingly entrenched policy views seriously compromise the integrity of an argument.

Comparisons between live export cattle and asylum seekers seem rather desperate and in poor taste, while howls of misguided outrage about the lack of regulatory oversight and suggestions we can simply replace our industry with domestically processed meat for export hardly warrant further comment. They have been categorically disproven and debunked a thousand times, but no matter how many times we explain the framework of ASEL and ESCAS, or point out the lack of electricity and refrigeration in importer countries which underpins the demand for live animals, it seems the facts continue to fall on deaf ears.

Another favourite argument, that Australia should follow New Zealand’s lead and ban live exports, overlooks the fact that NZ still exports thousands of breeding animals every year. Of course, NZ also lacks the advantages in supply, proximity to market and an in-country supply chain assurance system, which all combine to ensure the export of feeder and slaughter livestock from Australia makes economic and ethical sense.

Rather than helping to bridge the divide, contributions like those made by Dick, Martin and Hunter effectively drive a wedge between their mostly metropolitan readers and rural Australia, especially those of us in the north. It treats men and women working in the livestock export industry with contempt. Particularly appalling is the complete disregard for the thousands of professionally trained feedlot and abattoir workers in countries like Indonesia and Vietnam whose livelihoods depend on the humane treatment of Australian cattle in their care.

The fact is that nothing excuses exporters from the full force of the law where there has been a deliberate contravention of the laws governing the trade.

Exporters know that footage showing animal cruelty calls into question our genuine efforts to tighten supply chain controls. And our critics often say that animal welfare isn’t a high cultural priority in Vietnam, but the regulatory and practical progress being made in-market, with Australian assistance and encouragement, is compelling evidence to the contrary.

Furthermore, we are regularly self-reporting problems, as well as investigating and resolving incidents which compromise the integrity of our supply chains.

Alongside the regulatory platform, it is the work of exporters, customers and their staff, including Australian and locally based animal welfare trainers, that is having the biggest positive impact. Our people are our most valuable asset, which is why Australia has trained over 9000 people in handling and slaughter practices across 23 importer markets. Millions of dollars spent by exporters and our overseas customers in new infrastructure and equipment including stunners and restraining boxes is assisting in-market animal welfare officers and supply chain managers in overseeing the day-to-day wellbeing and welfare of exported livestock.

We are playing a vital role in a sophisticated professional system which, while not perfect, exists in a class far above any of the other 100 livestock exporter nations’ supply chains. It should be at least acknowledged and respected by those speaking out against the trade, even if they don’t care about the world-leading role Australia is playing.

Our industry is not afraid of being part of the mainstream policy discussion. We welcome all-comers to participate in a well-informed ongoing conversation.

We don’t shy away from scrutiny because we know a successful, sustainable livestock export industry goes hand-in-hand with providing leadership to improve animal welfare practices. Exporters are determined to openly address the concerns of all stakeholders, understand the in-market challenges and find common ground on solutions for continuing to support and ethical and economically viable animal welfare. While others in this debate employ other methods, we believe it is important to bridge the divide, rather than exacerbate it.