PLANS by Canberra to impose significant increases in live export cost recovery charges would not only fail the “pub test” from Townsville to Broome, they “wouldn’t even make it into the carpark”, Northern Territory Cattlemen’s Association president Chris Nott told the association’s annual conference in Alice Springs on Friday.

Mr Nott said the industry was “looking down the barrel” at regulatory costs in the vicinity of $100 a head* and all of those costs would ultimately be passed onto producers.

In 2018 the cost to the Department of regulating the livestock export industry, which the Government seeks to recover through fees and charges on exporters, was $8m.

Under a Cost Recovery Impact Statement released earlier this year, that is set to rise to $24 million a year in 2023-24.

Mr Nott said the Department has conducted seven reviews into livestock exports in recent years which have generated 157 recommendations for reform, and created more than 10 working groups, committees and forums related to live export.

“Here is the kicker: mortalities on boats prior to these groups and committees was 0.1 percent and have a guess what? They’re still 0.1 percent.”

Mr Nott said Agriculture Minister David Littleproud had previously explained that the hard work of producers was the reason behind many of the reforms he had made to live export over the past few years, and had said that by reforming industry he was protecting the industry for producers.

“He deserves some credit for this, it is good to know we have a minister in Canberra who recognises how difficult it has been in the last few years to be a producer…,” he said.

“But it is important the Minister understands these reforms need to be paid for and that costs put onto the exporters ultimately are going to come out of our pocket.

“He needs to look hard at how we got there and where are we and really ask himself if producers in Northern Territory should be paying for reforms that were all started to fix an issue on a live export boat leaving Western Australia carrying sheep to the Middle East”.

Fortunately, he said, problems in market were few and far between and the industry had spent millions of dollars to fix issues and to work under the highest level of regulation anywhere in the world.

No one was “asking for a free ride” or suggesting that exporters should not be regulated properly or believed there would not be future challenges in overseas markets that the Federal Government was not going to help the industry to fix.

“But if a Government Department in Canberra thinks they can jack up the price of regulation, force exporters out of the market, and then expect us to foot the costs, I would say to them we have been down this road before and they need to tread carefully,” he said.

“We are looking down the barrel of regulation in the vicinity of $100 a head and I don’t think that is reasonable.

“We’ve built up trade relationships over 30 years that must be respected, we have got a neighbour on our doorstep closer to us than the bureaucrats in Canberra are who need our cattle right now to feed themselves during a pandemic.

“We have got friends and family that rely on this industry and we cannot sit idle and watch this regulated into oblivion.

“These days people talk about the pub test in politics.

“Well I can tell you right now what is going on in Canberra in regulating live exports wouldn’t have made it through the front door of any pub from here Townsville to Broome.

“It wouldn’t have even made it into the carpark.”

He said it was time to bring common sense back to the discussion.

“If we’ve learned anything from the class action decision last year it is that meddling in industries that aren’t well understood from offices in cities can have devastating consequences from those that live on the land up here.

“All we’re asking for is a fair shake, let’s bring some reasonableness back to the regulations, animal welfare must always be central to regulations in live export, but expecting perfection and for punishing exporters who are doing their best to achieve it only ever ends up with producers holding the bag. Enough is enough on this one.”

Nationals Senators quizzed Department of Water, Agriculture and Environment (DAWE) officials about the justification for the proposed fees at a Senate Estimates hearing in Canberra late last week.

DAWE Deputy Secretary, Agricultural Trade Group, David Hazlehurst said that cost recovery in the live export sector has been under-recovered since 2011, leading to an overall deficit of about $30 million building up over time.

At present, only about 25 to 30 per cent of the cost of providing regulation to the industry every year was recovered.

The Department was not proposing to recover foregone costs from previous years, but to move to full cost recovery from the sector by 2023-24.

“What’s proposed is that there will be no recovery of the previous shortfalls; there’ll only be a move back to full cost recovery for each year by 2023-24.”

Nationals Senator Matt Canavan said his concern about full cost recovery is that an incentive exists within the department to shift costs onto an area where it is going to get money back.

“I don’t think an industry that is facing a lot of competition should have to bear that particular cost,” he said. 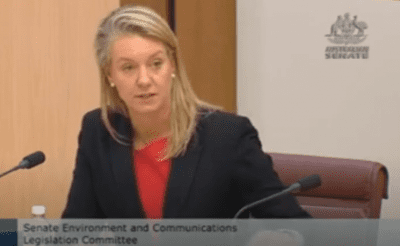 Nationals Senator and former Federal Agriculture Minister Bridget McKenzie questioned DAWE staff on what was driving the significant cost increases and was told the question would be taken on notice.

She said she wanted a detailed response: “When you answer my question on notice about what’s driven the cost increases, I don’t want ‘implementation of the Moss review’. I want a lot more detail than that.”

Plant and Live Animal Exports Division first assistant secretary Dr Melissa McEwen said some the parts of the branch that were about more general policy and not about standard setting remained appropriation-funded.

Senator McKenzie then asked if the Departmental staff could provide an understanding of the quantum of savings that planned Information and Computer Technology efficiencies within the Department are likely to deliver to industry.

“In the ICT space, we haven’t specifically quantified all the activities that we’ll be doing,” Ms McEwen said.

“Can I have a timeline on this, because industry is incredibly frustrated at having to pay for things that are very opaque. I’m trying to unpack and understand what benefit it is to them, and I’m not given any confidence today.”

Some rationalisation of exporters likely: LiveCorp

He said the statement outlines an increase in revenue for the industry from $5.5 million this financial year to almost $24 million by 2023-24.

“It won’t reach that high if efficiencies can be found, but to keep costs at the same level they are at now would require a fourfold increase in efficiency on both sides—the regulator and the regulated,” he said.

“This is an enormous task but something that our industry is keen to participate in.

“We expect that there’ll be some level of rationalisation in the industry due to increases in cost, and that does worry us.

“LiveCorp’s role is not to negotiate with the department over this. That’s a policy matter for ALEC, the Australian Livestock Exporters’ Council.

“As an RDC, LiveCorp does not engage in these activities related to the setting of fees between the department and the industry, but we’re always here to help.

“However, we do want to be part of regulatory reform round tables set up by the minister, which has already identified some opportunities to increase efficiency, including adjustments to approved arrangements and the notice of intent for export processors. LiveCorp will continue to support and in some cases drive the initiatives coming out of the round table.”

He added that a long journey to develop Animal Welfare Indicators to provide valid measures of physiological animal behaviour in the shipboard environment has recently been completed.

“We’ve fast-tracked implementation of the findings from the Murdoch University work through the development of shipboard animal welfare surveillance protocols, and data is now being collected on every voyage as part of the ASEL 3 requirements.

“Over time, this will provide that information to both the department and industry to guide further regulatory reform and continued improvements in animal welfare.”