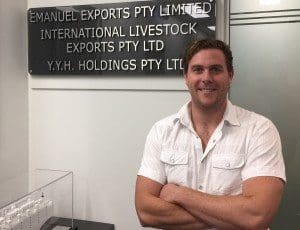 WA-based Emanuel Exports’ Ben Stanton was crowned the livestock export industry’s 2015 Young Achiever of the Year at LIVEXchange in Darwin.

AUSTRALIA’S livestock import industry has celebrated both its past and future by recognising the sector’s most significant achievers at its national conference, LIVEXchange, in Darwin.

Emanuel Exports’ Ben Stanton was crowned the industry’s 2015 Young Achiever of the Year on the back of his impressive 13-year tenure with the WA-based business.

The 34-year-old has worked in a number of roles with Emanuel and is now the company’s export manager for all sheep shipments.

Mr Stanton’s responsibilities include organising the purchase of stock to specification, delivery to the feedlot depot, loading of the consignment and adhering to the protocols of the relevant import market.

“Ben has contributed to industry issues and developing company processes and procedures for the Exporter Supply Chain Assurance System (ESCAS) and the Australian Standards for the Export of Livestock (ASEL), sharing his hands-on, practical knowledge of how livestock exports need to meet the various rules and regulations pertaining to the Australian trade,” Mr Daws said.

“ESCAS and other compliance standards require someone with an enormous understanding and work capacity, and with an annual volume of 1.5 million sheep, Ben has proven he is more than capable of meeting the demands of the role.” 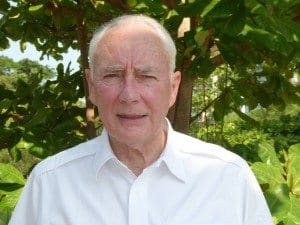 Mr Clausen, who was born in Denmark, has spent his entire career in shipping and succeeded his father Christian as head of family’s business in 1985.

The arrival of specialist sheep and cattle ships, starting with the Clausen Steamship Co in 1960, had much to do with the ultimate success of the Australian export trade.

The Clausen family has been in Australia for more than 50 years and, in that time, it is said that there hasn’t been a month when the family company didn’t have a ship servicing the livestock export trade.

The business, which changed its name to Corral Line in 1983, has used 35 different ships to transport sheep and cattle to market. Corral Line now operates four vessels, with three in Australia, carrying breeding cattle to China, Russia and South-East Asia.

Australian Livestock Exporters’ Council Chairman Simon Crean said it was important the livestock export industry acknowledged the achievements of the individuals who make significant contributions to the development of the trade.

“From its humble beginnings more than a century ago, the Australian livestock export sector has grown to become a $1.4 billion plus industry business that supports over 10,000 jobs throughout regional Australia,” Mr Galvin said.

The industry also paused to acknowledge the passing of two highly esteemed livestock export stalwarts, Peter Lang and John Darling, both of whom passed away in the past 12 months.

Mr Lang, as managing director of Fares Rural, was one of the major livestock exporters commencing in the trade in the 1970s.

He served in a number of industry leadership roles including as chairman of ALEC and the Red Meat Advisory Council, a director of Livecorp and as WA live export coordinator with Meat & Livestock Australia.

Mr Darling was the founder of livestock export company AustIran in the 1970s and was responsible for the shipment of about 3 million sheep to Iran until the market effectively closed following the revolution in 1979.

“We can’t underestimate the contributions made by these gentlemen in our industry’s formative years. We salute them and the legacies they have left behind,” Mr Crean said.