The Department of Agriculture and Water Resources this afternoon suspended the licence of WA based livestock exporter Emanuel Exports. 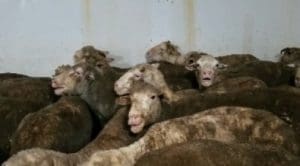 Footage of sheep on board the Awassi Express exposed on 60 Minutes.

The Department says the licence will remain suspended pending a full review of the company’s response to a show cause notice.

A statement from the department released at 4:45pm on Friday afternoon said:

The laws that regulate the export of livestock include strict requirements to ensure the health and welfare of animals.

It is the responsibility of each exporter to ensure it meets those obligations.

It is not appropriate for the department to provide more information while the investigation is ongoing.

In a statement the RSPCA said said the suspension was “incredible news”.

It follows an announcement earlier this week that another large live sheep exporter Livestock Shipping Services was halting exports for the Middle Eastern summer this year.

The RSPCA said the two businesses account for almost all live sheep exports from Australia.

“We have long said that if the laws were enforced, live export would become impossible. This is proof of that,” the RSPCA statement said.

“Make no mistake, Emanuel’s is not the exception. What we saw in the 60 Minutes footage included routine conditions across multiple voyages. This is what long-haul live sheep export looks like, and it must not be allowed to continue.

“This is a crucial step toward the inevitable end of live sheep exports.”

WAFarmers President Tony York said the organisation is keenly anticipating the results from the regulatory review that Federal Agriculture Minister David Littleproud initiated upon his own department.

He said that regardless of the review and its results, WAFarmers supported the investigation of any company suspected of intent to cause cruelty in such a way that animal welfare standards are compromised.

Mr York said he understood the current investigation is in its initial phases.

“It is obviously very early days and there will be more detail of the suspension to come. We must allow the Department and the investigation to take its due course,” he said.

“WAFarmers is confident that Emanuel Exports will work collaboratively with the Department of Agriculture and Water Resources through this process until it is complete. Only upon completion will it be clear to industry stakeholders and the general public what the full aspects of any case are.

“WAFarmers supports any activity to improve animal welfare outcomes across our sectors. Bearing that in mind, we are also supportive of the continuation of the live sheep trade and its ongoing improvement.

“WAFarmers is confident that the Department will take the appropriate measures to ensure the trade can continue whilst improving on-board conditions for animals and ensuring our clients’ needs are met.”

Today Emanuel Exports received notice from the Federal Department of Agriculture and Water Resources that its live export licence has been suspended. Emanuels has been advised the export license will remain suspended pending a full review of its response to a recent show cause notice. Emanuels will cooperate fully with the Department in its review. It is not appropriate to provide any further public comment until the Department has completed its review.

Background Information: Emanuel Exports is a pioneer of the Australian livestock export trade, specialising in the live export of sheep and cattle. Founded in 1955, and holding Export License No 6, Emanuel Exports is one of Australia’s largest livestock exporters, and Australia’s largest exporter of live sheep, exporting well in excess of one million sheep per year to the Middle East. The company’s first Middle East sheep shipment left Fremantle in 1963, destined for Kuwait. Emanuel Exports is a vertically integrated business and is considered a world leader in the selection, preparation, handling, management and supply of high quality livestock to global markets. The company’s operations and management expand across all states of Australia and are overseen by a strict quality assurance program that meets customer specifications as well as meeting all requirements under relevant state and territory legislation and those defined under Australian Government legislation (the Australian Standards for the Export of Livestock – ASEL).