The Port of Townsville jumped eight places to rank second on the list of Australia’s biggest cattle export ports in 2013-14.

That volume positioned Townsville second behind Darwin, which exported 413,364 for the same period.

The surge in exports from Townsville was driven largely by the high supply of cattle flowing out of northern Queensland due to drought-forced destocking and the simultaneous rise that occurred in cattle orders from Indonesia and Vietnam. 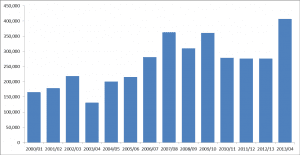 However, the high costs of exporting from Darwin this year caused by port congestion issues, shipping bottlenecks and resulting additional demmurage fees also caused exporters to fill re-direct some shipments from the Top End to alternative northern ports.

Part of Townsville’s attraction as an alternative to Darwin is underpinned by its proximity to large cattle numbers, while a recently completed road project also now gives six-deck road trains direct access to the port.

The previous annual record for cattle shipments from Townsville was 166,409 cattle, set in 2002.