FOUR competing live exporters supplying cattle to Vietnam have committed to working together to proactively implement a higher-level approach to assuring improved animal welfare outcomes in the market.

Vietnam has grown to become Australia’s second largest cattle export market in recent years, but remains one of the Australian cattle trade’s highest risk markets in terms of incidents of ESCAS non-compliance.

There have been seven incidents of ESCAS non-compliance involving Australian cattle reported on the Department of Agriculture and Water Resources website in the past year, with five of those incidents occurring in Vietnam.

The incidents – four of which were self-reported by exporters and one by Departmental observers – relate to loss of traceability through cattle having been moved to facilities outside an exporters’ control, and one relating to an observation of non-compliant handling of cattle in the market.

In 2015 following several reported incidents of ESCAS non-compliance in Vietnam, all Australian exporters supplying cattle to the then rapidly growing market committed to implementing a six-point plan to improve animal welfare compliance in Vietnam over and above the requirements of the ESCAS system.

The following year a Vietnam Working Group comprised of active exporters to Vietnam and LiveCorp commissioned an independent expert review of the industry’s implementation of ESCAS and the six-point plan.

However, two years on, the recommendations of the review are yet to be adopted industry-wide by all exporters.

Participation in the group, which is open to all Australian exporters supplying the market, requires each member to commit to openly sharing on a common web-based platform any information about customer facilities where incidences of non-compliance are identified, and the corrective action they have taken in response.

The members of CSAW must comply with a code of Conduct, collective best-practice standards, a standard service agreement with an independent professional compliance and traceability service provider, and an administrative charter.

A central service provider oversees the control and traceability of all participating exporters’ cattle in the market.

Where the service provider identifies a ‘notifiable event’ – an example may include a customer facility where cattle are unloaded from trucks without the use of a proper loading ramp – that event is then posted to the CSAW noticeboard where it is viewed by all members.

It is then up to the member responsible for those cattle to follow a standard procedure to investigate, take corrective action and ‘close out’ the event.

In the past there was no guarantee such information would have been shared with other exporters supplying cattle to the same facility.

The CSAW program is designed to reduce the risk of a non-compliant facility simply switching to another exporter without adopting the necessary improvements. 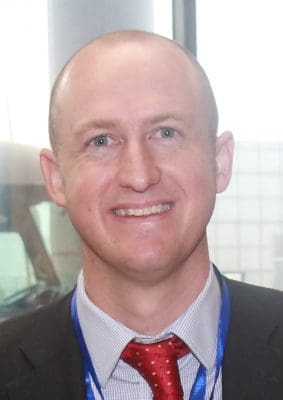 “It is open book and it is transparent,” Frontier International Agri managing director Will McEwin said.

“It is built on collective responsibility and collective learning. When a member implements a corrective action or a directive about a facility, then every other member supports that and follows suit.”

Mr McEwin said CSAW was developed to provide “a more effective on the ground mechanism” to bring cultural change to the industry and to achieve consistent and continuous improvement.

He said a pilot of the program in July received good take-up by importers and individual customer facilities.

“They understand what we are trying to do and that we’re not coming in with a big stick, it is about here is another way to do it and to monitor these improvements.

“Some of the feedback we get from in-market facilities and importers is that with ESCAS every exporter applies it differently.

“They just want it applied consistently.

“Through CSAW that is what they get, it is completely transparent, the way we apply ESCAS is consistent across all member supply chains.

“The issues identified are recorded in a standard format with video footage attached to the report.

“As we build up the database we can then drill down into all facilities and see genuine improvement or a facility-level recurring issue, it is a powerful database of information for everyone to respond to.

“We don’t claim that CSAW is the panacea and we aren’t suggesting that the approach to animal welfare taken by other non-member exporters is flawed. What we are doing is demonstrating that the industry is listening to its stakeholders concerns regarding animal welfare across the supply chain and we are proving that we can work together for common good.”

Documentation underpinning the CSAW model states that all exporters active in Vietnam “have an obligation to be especially vigilant and diligent” in the high-risk market.

The exporters involved say any other Australian exporter supplying the market is welcome to join CSAW.

There is no joining fee, just an undertaking that they fully commit to the requirements of the program. (It’s important to note that some Australian exporters supplying Vietnam have already developed their own internal company programs with animal welfare standards over and above the requirements of ESCAS and choose to continue to operate under their own company models.)

There is a cost to the underlying control and traceability system and Mr McEwin admits this is relatively high as a base cost and the additional demands of the CSAW model have introduced another cost element.

Beef Central understands the cost of meeting the program’s requirements is likely to be in the vicinity of an extra $10 per head. For individual exporters supplying tens of thousands of cattle per year to the market, the commitment can add up to a substantial additional annual cost.

But the exporters involved say a collaborative, open sharing approach is necessary to drive cultural change in the market and to ensure all customer facilities handling Australian cattle are meeting acceptable animal welfare standards.

While the trade is coming under unprecedented public pressure to lift its game in the wake of the Awassi crisis, there are also many producers who want to see greater assurances that exporters are doing everything they can to ensure their livestock are being handled in the best possible way.

On this note it is possible the CSAW initiative may help to position participating exporters as ‘exporters of choice’ for producers who prioritise the welfare of stock they sell to export.

While CSAW is a collaborative compliance program, all exporters involved remain responsible for their own individual supply chains.

The Australian livestock export industry is currently in the process of developing the Livestock Global Assurance Program (LGAP), which places increased responsibility on the owners of feedlots and abattoir operators in all markets receiving Australian cattle to maintain high animal welfare standards.

The industry says LGAP is expected to be in place to certify its first overseas facility by mid-2019.

Mr McEwin said CSAW members saw the program as complementary to LGAP, but CSAW is “up and running now”, whereas LGAP appears to be at least 12 months away from implementation.

Mr McEwin said there was also a feeling that in a market like Vietnam, in the context of ensuring sound animal welfare, a centralised and open model for all exporters such as CSAW would be the most effective model to drive change.

“CSAW members believe this is very much the appropriate model for Vietnam,” he said.

“We have to do something as an industry to improve animal welfare outcomes and we believe this is a meaningful and open and transparent way to lift the bar.

“The reality is we have to do more. The power of the open platform is that if one member ceases supply to a facility all have to follow suit, and that takes the commercial aspect away.”