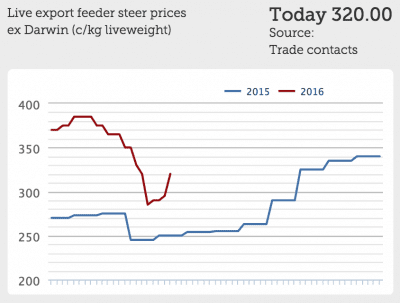 As highlighted by our regular Beef Central’s live export graph, prices for feeder steers in Darwin have recovered from around 285c/kg to 320c/kg in the past few weeks.

Export cattle prices in northern Australia have found a new level in recent weeks following the release by Indonesia of second trimester import permits for 250,000 cattle two and a half weeks ago.

Export buyers are offering prices for feeder steers to Indonesia of around 290c/kg liveweight delivered to Charters Towers for export from Townsville and 320c/kg delivered to Darwin.

The lull in activity combined with the onset of first round musters and new season cattle supply saw export prices wound back to as low as 250c/kg ex Townsville in April.

However the release of second-trimester permits has resulted in prices recovering some of that lost ground, suggesting that the lower rates were not adequate to attract sufficient numbers of cattle.

In the weeks following the release of permits, prices being offered for feeder steers for export from Townsville have gradually edged upwards to 265c, then to 270c, and, as of this week, 290c.

Townsville stock agent Tim McHugh, Hogan and McHugh, said he was aware of prices of up to 300c being offered for producers with larger volumes of cattle.

A good parcel of late season rain had reduced some of the seasonal imperative on northern Queensland producers to sell, which was putting pressure on the trade to lift prices to attract the numbers it needs to fill orders.

“I think numbers are thinning out, and given what is happening with the season and the way the country is holding on, people aren’t under the pump, they have all lightened off over the last 12 months,” Mr McHugh said.

“I have been saying for a couple of months that the end of May was going to be the cut off, and that the job would start to turn around at that time.

“And that has started in the south. In the last week or so there was the biggest difference I have seen for a long time in prices between Townsville and the southern markets, it was 40c a kilo (over the hooks).

“But they went up here yesterday by 5c, so everything has bounced here I do believe, we have hit rock bottom and it can only go one way.”

Further north in Darwin there has also been some hesitation evident from producers to accept the initial rates offered for second-trimester orders.

Earlier in the wet season prices had risen to as high as 385c/kg ex Darwin. Prices dropped to about 285c/kg by the start of May, and have gradually climbed back up to around 320c/kg now.

Export activity for the first month of the new trimester has not reached the volumes that might normally be seen at the start of new permit allocation period, Northern Territory Livestock Exporters Association (NTLEA) chief executive officer Stuart Kemp said this morning.

“We don’t have official numbers for May yet but there have not been the numbers you would anticipate for the first month of a new trimester with such a high volume of permit available,” he said.

“There just haven’t been a lot of cattle about, prices on offer were probably a little lower than producers were expecting on the back of such a high price wave through the wet season, so a lot of ships again have gone back to Townsville, and as far south as Geraldton, Broome and Wyndham.

“When the new permits came out, exporters negotiated contracts with importers. As those orders are filled they will renegotiate fresh contracts and the market will adjust to find its level for this time of year, we will probably start to see a few more cattle come out of the NT.

“Just at the moment there seems to be just a little hesitation from producers to put cattle on the market or accept current offers, either that or they’re just not available.”

Shipments to Vietnam, while back from the record-breaking levels of last year, were progressing at a steady pace, Mr Kemp said.