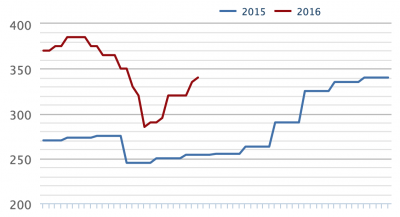 Prices for feeder steers delivered to Darwin have been quoted from 320c/kg to 340c/kg in recent days.

The higher end of that range is 55c/kg above the 285c/kg prices on offer at the start of May.

That was just before Indonesia issued new permits for 200,000 feeder cattle for the second trimester from May to August.

Since that time 350kg steers delivered to pre-export quarantine yards in Darwin have risen in value by more than $150 to over $1100 per head.

That is good news for producers, less so for exporters and their importing customers in Indonesia.

“As happens every permit period exporters and their importers sit down and negotiate volumes for the next little while, and a lot of the current contracts would have been negotiated when the buy price was certainly a lot lower than $3.20/kg,” Mr Kemp said.

“You always have to be mindful there is someone at the other end who has got to be able to afford these rising prices.”

“It is no secret that Queensland’s herd is very low, on the back of four or five terrible years, and the Territory herd hasn’t really changed, due to the under investment in production and productivity that followed low returns and uncertainty in the wake of the trade shut down.

“In Western Australia, the Kimberley had another bad wet season this year so there is not a lot of cattle around.”

The tightening supply situation is also causing some exporters to surrender long-term shipping charters coming up for renewal.

Industry sources have told Beef Central that several long-term charter agreements between exporters and ship owners have recently expired, or are about to, and will not be renewed by the exporters involved, because there is not the cattle supply to ensure they can keep the vessels perpetually utilised for the year ahead.

Rather they will return to chartering their shipping requirements on a spot-basis, which is more expensive per shipment and reduces scheduling certainty, but also means they have no ongoing cost commitments outside each voyage.