THE Australian Government has launched a new program to improve training for workers in Vietnamese abattoirs handling imported Australian cattle. 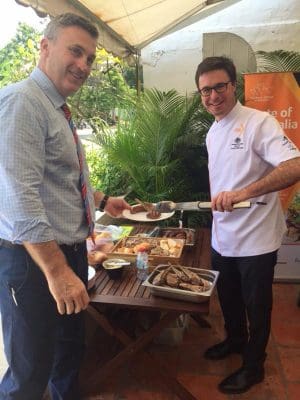 The program was launched at the Vissan Abattoir in Ho Chi Minh City on Friday by federal agriculture minister David Littleproud during a four-day tour of Vietnam.

The program is being funded as part of part of the Federal Government’s five-year Aus4Skills program, a five-year $146 million investment focused on upskilling Vietnam’s workforce.*

“The MATES program, funded by Australia, will improve key integrity aspects of the live export supply chain in Vietnam and to modernise the supply chain from production to distribution.

“It will also assist industry to meet consumer expectations when it comes to food quality and safety.

Mr Littleproud said the investment was an example of a ‘win-win’ collaborative relationship, improving food production integrity practices in Vietnam and export opportunities for Australia.

“Visiting FutureMilk left me with a feeling of pride in how an Australian company can export expertise and entrepreneurship and provide a significant boost to jobs and industry in Vietnam.

“FutureMilk runs more than 1000 dairy cows and employs over 70 staff, many local women who would not otherwise have the opportunity to earn a wage.”