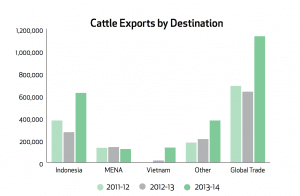 A rebound in export volumes has produced a funding windfall for the live export industry’s levy-funded service delivery company LiveCorp.

At its annual general meeting in Melbourne today, LiveCorp reported a $1.936 million profit for 2013-14, more than five times the $350,000 profit reported for the previous year.

The surplus was delivered courtesy of resurgence in the number of cattle exported from Australia in 2013-14.

1,131,122 beef cattle worth $1.048 billion were exported live from Australia during the period to satisfy growing demand in Indonesia, Vietnam, Malaysia and Russia, representing a 79pc increase in volume and a 78pc increase in value year on year.

LiveCorp’s revenue flows directly from levies paid by exporters on every head of livestock shipped or air-freighted from Australia each year.

The compulsory levies are accrued at a rate of $0.0095238/kilogram of beef cattle exported, 60c/head of sheep exported and 50c/head of goats exported. Dairy exporters can also pay a voluntary levy of $3/head.

LiveCorp invests the levy funds in marketing and research, development and extension programs for the live export industry in conjunction with Meat & Livestock Australia under the Live Export Program (LEP).

The 2013-14 result represents a substantial turnaround for Livecorp’s finances from previous years.

In 2011, Livecorp reported the worst financial result in its then 14 year history, a $416,099 operating loss, which reflected the impact of the Gillard Government’s shutdown of live exports to Indonesia earlier that year.

In recent years the LiveCorp board and management has undertaken a significant cost-cutting program to improve operational efficiency.

The size of its board was reduced from seven members to five, some staff positions were changed from full time to part-time and LiveCorp moved its office into shared rental premises with MLA.

Livecorp chairman David Galvin said the corporate efficiency reforms had now ensured that a large proportion of levy funds received by LiveCorp could be spent on programs that benefit members. 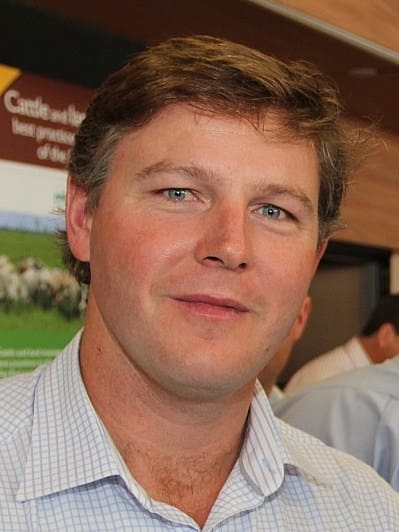 LiveCorp chief executive Sam Brown said the surplus will be directed into the areas of “greatest program gain” for the industry including:

LiveCorp’s annual report for 2013-14 notes that 71pc of its RD&E budget was spent on animal health and welfare.

One of the highlights of the program this year included the rollout of the LEP’s first “App”.

The Veterinary Handbook App’ was launched by Federal Agricultural Minister Barnaby Joyce in May and received the following endorsement from the President of the World Organisation for Animal Health (OIE):

“OIE congratulates the Australian livestock industries for this initiative to further assure the health and welfare of livestock during transport to their export market destinations. At every stage of an animal’s life early recognition of an emerging animal health or welfare problem is vital for its effective management and control. This App provides stockmen and women with easy access to information that will enable their early recognition of any emerging animal health or welfare problem.”

The report said the Live Export Program has trained over 7000 people worldwide in animal welfare and husbandry since 2011.

“It is unfortunate that not enough of the general public know that exporters and importers, along with the collective efforts of LiveCorp and the LEP, are driving the most meaningful animal welfare outreach program across the world,” CEO Sam Brown said in his annual report.

“The joint LiveCorp/MLA LEP continues to be the fundamental demonstration of collaboration across industries to harness the collective R&D effort to deliver productivity, animal welfare and market access for both livestock exporters and producers.”