In the past year and a half Indonesia has made no less than 16 changes to regulations affecting agricultural imports, according to statistics presented at an AgForce live export forum in Townsville yesterday.

Some of those changes have been minor and some have been major, such as the 1:5 breeding cattle to feeder cattle import requirement introduced in September last year, Australian Livestock Exporter’s Council CEO Simon Westaway told the forum.

That statistic in a nutshell highlights the complexity of the trading environment Australian exporters deal with to keep  Australia’s 600,000 cattle per year export trade to Indonesia moving.

Austrex’s Jake Morse told the forum that a mere 100 gram increase in the 2.5kg annual per capita beef consumption of Indonesia’s 260 million people would require an additional 150,000 cattle per year to satisfy.

The Australian cattle trade to Indonesia has developed into a major industry due largely to the strong underpinning mutual economic benefits for both countries. Australia has large herds of tropical cattle well suited to feeding in Indonesian feedlots that lie a short 4-5 day boat trip away. Importing Australian cattle allows Indonesia to value-add abundant agricultural by-products, create jobs in regional areas and bridge the large gap that exists between its population’s demand for beef and what its own cattle herds are realistically capable of producing.

But continuing to stand in the way of the complementary benefits for both economies is a complex and ever-changing regulatory environment.

A front of mind example is Indonesia’s policy, introduced in September last year, which requires importers to import at least one breeding animal for every five feeder cattle they import over the ensuing two year period, to support Indonesia’s long-held aspiration to achieve self-sufficiency in beef production.

The policy imposes massive costs on importers by forcing them to outlay and tie-up vast sums of capital to buy expensive breeding cattle from which they cannot hope to generate a return until those cattle begin producing saleable progeny two to three years away.

Importers had to agree to the policy when it was introduced in order to continue receiving new feeder cattle import permits.

As Dr Ross Ainsworth has explained in his monthly Beef Central columns, the policy meant importers were faced with two basic options, both with the same eventual result: either don’t agree with the policy at the start and go broke immediately, or agree and go broke when the Indonesian Government audits their imports in two years time to assess if they have complied with 1:5 breeder to feeder ratio.

Import figures show that most importers have opted for the latter option, which has allowed them to continue trading, undoubtedly in the  hope that in two years time the Indonesian Government will have moved away from the policy or will not enforce it. 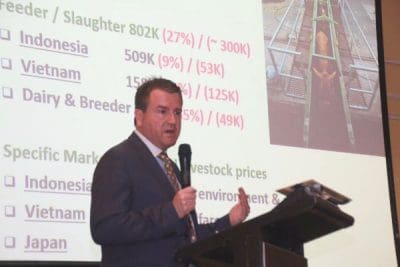 Mr Westaway told yesterday’s forum that breeder volumes represent 3.6 percent of total cattle exports to Indonesia in the past year, well below the 17pc level that would be required for importers to be fully compliant with the 1:5 breeder to feeder ratio.

“There is no way to catch up obviously,” he told the forum.

Mr Westaway said industry representatives in Australia and Indonesia were attempting to negotiate a possible compromise with the Indonesian Government that may be more economically viable and achievable for the trade.

One option the trade is believed to be working on would involve tying breeder import requirements to the capacity of each importer’s feedlots, rather than as a rigid percentage of their total feeder cattle imports.

As Ross Ainsworth explained in his most recent column, importers have to deal with two Ministries (Agriculture and Trade) in their hopes of gaining a compromise, which makes these negotiations far more complex.

If the Indonesian Government does enforce the policy it would inevitably send many importers to the wall and cut off an important source of fresh beef supply that Indonesia has long relied upon to satisfy its population’s demand for beef.

The new presence of lower-priced Indian Buffalo meat in Indonesia potentially eases the Indonesian Government’s concerns about impacts to local beef supply should the policy force large numbers of its feedlots out of business.

But it is hard to see how this policy could be enforced without having a significant and potentially devastating impact on beef supply and food security in Indonesia, given that the country still relies on imports of around 600,000 cattle per year from Australia to fulfill its beef demand requirements.

Only time will tell how this pans out, and, as anyone with experience in the country will attest, trying to predict political decisions in any country, let alone one with the complex political landscape of Indonesia, is an exercise in futility.