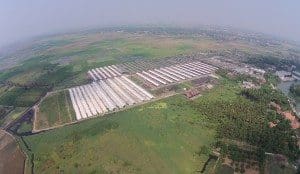 After slashing cattle imports this quarter to just 50,000 head, exacerbating a supply shortage which has caused record beef prices, butchers strikes and a widespread public backlash, the Indonesian Government is now moving to direct blame for the shortage onto cattle importers.

The raids follow Indonesian Government claims that importers are engaging in cartel behaviour and deliberately withholding slaughter-weight cattle from market, with the view to pushing prices higher and inciting public unrest in order to increase pressure on the Government to release more import permits.

In raids yesterday two feedlots owned by TUM near Jakarta were “sealed” amid claims by police that among the 22,000 cattle on feed in both facilities, 4000 were ‘slaughter ready’ cattle that should have been released to the market already . Other unnamed feedlots and offices have also been raided by police in the past 24 hours.

The Indonesian Government is demanding that importers sell all slaughter weight cattle immediately to help to alleviate the beef supply shortage.

However, importers are reluctant to sell all heavy weight cattle at once when there are no import permits available to bring in more feeder cattle to replace them.

The only option importers have to compensate for the lack of numbers they are permitted to import is to hold cattle on feed for longer and add more weight to produce more kilograms of beef per animal. They also want to regulate the flow of slaughter cattle out of their feedlots to try to ensure their butcher customers have access to a consistent supply of slaughter cattle going forward.

Beef prices in Jakarta have soared to 140,000 IDR/kg (AUD$14/kg) in the wake of the Indonesian Government’s surprise decision in mid-July to cut import permits for feeder cattle this quarter back to 50,000 head, well below the 200,000 head importers had advised would be needed to ensure there would be enough beef in the market to satisfy consumer demand.

On Monday, with the supply shortage worsening and beef prices relentlessly rising, the Indonesian Government conceded that limited beef supplies were a problem.

It announced it would issue import permits for another 50,000 slaughter-ready cattle, but rather than issue these to private importers as usual, it would appoint the Indonesian Government owned food logistics agency Bulog  to distribute the permits. (It is understood that Bulog does not have ESCAS facilities of its own so will sell the permit onto existing importers, which will add a further increase to the price of beef at the wet market).

However, despite now acknowledging that there is a severe shortage of beef in the market, the Indonesian Government is apportioning blame for the scarcity to what it terms as ‘cartel behaviour’ by cattle importers, rather than on the dramatically reduced import permits.

In announcing the “short-term measure” of new import permits for 50,000 slaughter weight cattle on Monday, chief Economics Minister Sofyan Djalil warned that the Government would seek to ensure the high prices in the market were not “caused by hoarding”.

President Joko Widodo and trade minister Rachmat Gobel also referred to a “beef mafia” holding stock back from the market. “There are certain groups that deliberately hold on to the beef supply to raise the price; it is being investigated,” Mr Joko said.

Ministers Djalil and Gobel were casualties of a cabinet reshuffle by the Indonesian President two days later.

In comments to Indonesian media yesterday President Joko Widodo was still painting imports as a problem for Indonesia, making the statement “we must have courage to stop imports”.

In March, for example, the Jakarta Globe warned that the Government’s moves to clamp down on imports would cause beef prices to soar by 50 percent in the following months.

“Analysts say Joko’s push to produce more food at home risks repeating mistakes his predecessor made in a similar drive that prompted beef shortages and stoked a politically-damaging corruption scandal,” the newspaper reported.

“Despite past missteps, Joko’s government has adopted an increasingly nationalistic approach to food policy as it looks to protect farmers.”

The calls to reduce imports go against evidence that Indonesia’s own herd is also rapidly reducing and actually heading further away from the target of self-sufficiency.

The same newspaper yesterday reported that Indonesia’s local cattle population has shrunk by 30 percent over the last two years, as farmers slaughter breeding and even dairy cows to fulfill domestic market demands.

The country will end up with between 8.7 million and 9.3 million head of cattle by the end of 2015, down from 12.5 million head in 2013, according to Ilham Akhmadi, chairman of the Yogyakarta chapter of the Indonesia Beef Association (APDS).

At the same time, Indonesian beef demand is rising. The association estimated each Indonesian will consume 2.6 kilograms of beef this year, up from 2 kilograms last year.

Teguh Boediyana, chairman of the Indonesia Cattle and Buffalo Breeders Association (PPSKI), said Indonesian policy makers had “overestimated the domestic cattle population”, which had led to the “stricter-than-necessary curbs” on beef imports.

“Out of the total population, only 12 percent to 14 percent of our cattle was ready for slaughter. That is because the cattle population was not all mature and generally the breeders are only willing to sell their animals at particular times of the year,” Teguh said.

In the Jakarta Post this week, Indonesian Cattle Importers Association (APFINDO) spokesman Jono Liano said suggestions that importers should be blamed for the beef shortage were not true.

“The (butchers’) strike began because there was no supply, not because we intentionally held the supply,” Joni said.

Australian cattle disappearing to other markets

The bigger picture that does not seem apparent to Jakarta is that while the Indonesian Government continues to send negative signals to Australia, Australian cattle are disappearing to other markets.

Beef Cental understands that Bulog sent an email to Australian exporters yesterday stating that it expects the 50,000 slaughter weight cattle to fill the new permits to be delivered to Indonesia within two weeks.

This is despite genuine signs that finding 50,000 suitable bos Indicus cattle in the required 380-500kg weight range from anywhere across northern Australia is going to prove an enormous challenge at this time of year, due to the dry season and strong ongoing demand for such cattle from other export markets and from Australian processors.

When Indonesia issued permits for just 50,000 feeder cattle back in July, exporters made plans to direct their shipping elsewhere. Those ships are now tied up on other runs. As the Australian Livestock Exporters Council has repeatedly advised this year in its calls for Indonesia to move to issuing annual quotas, the live trade “is not a switch on or off industry”.

Interestingly, chicken prices are also now increasing in Indonesia too, and wet market traders in chicken are reportedly planning a strike from this coming Sunday, August 16 to Wednesday, August 19.

Chicken is a staple source of protein in Indonesia with more than one million chickens consumed in Jakarta alone every day. This presumably will add further pressure to the Indonesian Government to reassess its approach to managing food supplies.