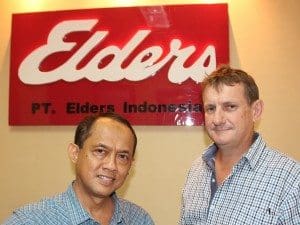 Indonesian cattle importers are confident they have enough cattle on feed to satisfy beef demand for the forthcoming peak Ramadan/Lebaran consumption period, which this year falls in mid-July.

Indonesians celebrate the end of the Ramadan fasting month and the beginning of the Idul Fitri/Lebaran holiday with family focused gatherings and feasts, during which time it is traditional to eat Beef Rendang.

Ensuring there is enough beef available to keep prices at affordable levels for consumers is a key issue for the Indonesian Government ahead of the key annual holiday each year.

That meant Indonesian importers and their Australian exporters had to rush in early April to get cattle assembled, shipped to Indonesia, and fed for around 90 days to slaughter weights in time for the peak Lebaran demand period on July 17.

In a sign that the Indonesian Government itself was becoming concerned about the availability of cattle this year it issued additional import permits for 28,000 head for heavier, ready to slaughter cattle in early April.

In an interview with Beef Central in Jakarta this week, Endro Susilo, the board coordinator of the Indonesian cattle importers’ and lotfeeders’ association APFINDO, expressed confidence that enough cattle were now on feed for the requirements of Ramadan/Lebaran.

APFINDO members collectively had over 200,000 cattle on feed in their feedlots at the beginning of May, Mr Susilo said, which should guarantee sufficient beef supplies for the holiday period.

It has been a challenging year for Indonesian importers and their Australian export suppliers because they have had to wait until the start of each quarter to find out how many cattle the new Indonesian Government will allow them to import.

By contrast, in late 2013, the-then Indonesian Government’s Ministry of Trade met with APFINDO members to discuss how many people were in Indonesia, what their likely beef consumption would be for the year ahead, how many local cattle would be available to the market, and then what numbers of imported live cattle and boxed beef would be required to fill the gap between predicted demand and available supply.

So when 2014 began, Indonesian importers knew their Government planned to import 720,000 cattle for the entire year, which gave them the certainty to plan ahead with exporters to secure Indonesia’s required supply.

(Showing how close to the money those predictions were, Indonesia went on to import 730,000 cattle in 2014).

This year, however, importers have had no knowledge of what forward permit allocations will be until each new quarter begins.

Prior to the first quarter, APFINDO members collectively requested permit allocations for 180,000 head, but ultimately received permits for just 98,000.

That takes total number of permits allocated for the first two quarters to 376,000 head. 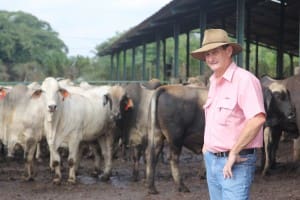 Richard Slaney with Australian steers on feed at the Elders’ feedlot near Lampung in Sumatra.

APFINDO members met in Jakarta this week to prepare their request to the Indonesian Government for permit allocations for the third quarter.

Mr Susilo said APFINDO members could not divulge the collective number of permits they have requested for Q3, but he said the group’s prediction was that allocations would be similar to the third quarter last year.

In that quarter the Indonesian Government issued permits for 167,000 cattle, which contained a mix of 133,000 feeder cattle and 34,000 slaughter cattle.

Indonesian importers and Australian exporters met with Ministry of Trade and Ministry of Agiculture representatives in Jakarta in March to request that the Government again provide annual permit indications at the start of each year, to give the trade the certainty it requires to secure the cattle Indonesia needs.

“At least that for us is something that would solve the issue of certainty, and for exporters as well, they would now how much we will need,” Mr Susilo said.

“The lack of certainty is a big challenge now.”

Mr Susilo said the Indonesian Government was still yet to formally respond to the industry’s request.

Another cause of concern and uncertainty for Indonesian lot feeders was triggered last month when the Ministry of Agriculture released a decree requiring that female cattle for breeding programs comprise 30pc of total cattle numbers feedlots have on hand by the end of 2015.

The law would require Indonesian lot feeders to buy female cattle at a ratio of 30pc of their entire cattle import purchases, and to keep them on hand for three years before they could be sold for slaughter. This is despite feedlots lacking the land required to successfully breed cattle.

Being forced to buy female cattle that could not generate a return for at least three years would put every Indonesian feedlot out of business, Mr Susilo said.

The law has been proposed by members of the new Government who have aspirations for Indonesia to rapidly achieve a goal of self-sufficiency in beef cattle production.

This is despite the ill-fated results of the previous Government’s attempts to achieve self-sufficiency in an unrealistically short five-year time frame, which imposed significant cuts on cattle imports and led to a severe beef supply shortage, sky-high cattle and beef prices and the accelerated slaughter of Indonesia’s breeding cattle herd.

There is still some uncertainty as to whether the new 30pc breeder decree will become law, with debate surrounding whether the Ministry of Agriculture or the Ministry of Trade has the final authority in the new Government to oversee the allocation of cattle import permits.

APFINDO has written to the Indonesian Government asking that it not proceed, stating that the 30pc breeder rule would put the entire Indonesian feedlot industry out of business, but has yet to hear a response.

“We are suggesting that the Government give an incentive to those who do breeding,” Mr Susilo said.

“We are asking that it is not made compulsory. We are the private sector, it should be the Government who is doing it (trialling breeding programs).

Mr Susilo said incoming comments made by the newly appointed director-general of the Ministry of Agriculture who started in the position last week – a professor and lecturer from a respected agricultural university in Indonesia – had provided some optimism from the feedlot industry so far.

“His initial statement on this breeding issue was very soothing to us,” Mr Susilo said.

“He is saying that self-sufficiency needs more time.”

Mr Susilo said the market was currently “a bit slow”, but demand would pick up pace with Ramadan due to commence on June 18.