One of the early pioneers of the live cattle export trade between Australia and Indonesia has passed away in Jakarta.

Nurendro Trikesowo was one of the first people to initiate a trade in feeder and breeder cattle from Australia, as early as 1985. He saw the trade grow to more than 720,000 head a year at its zenith, over the next 30 years. 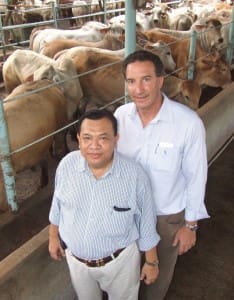 He was widely known in the trade in Indonesia, and by his many Australian colleagues by the term of respectful affection, Pak Nur.

Pak Nurendro worked closely in an agency capacity with both Indonesian importers, and Australian exporters in cultivating the early cattle trade.

He had held a vision for the establishment of a beef cattle trade out of Australia, ever since working as a jackaroo in Central Queensland for a period in the late 1970s – a highly unusual occurrence in that era.

The experience saw him rapidly develop a deep interest in the cattle industry, and helped stimulate the establishment of a live trade in cattle between the two countries some years later.

Over the years Pak Nurendro helped many of today’s prominent Indonesian cattle importers to establish and develop their import businesses, and their feedlot infrastructure. He was closely linked to the establishment of some of the biggest names in the business, including Tum, and assisted other large businesses including Santori.

He also played a pivotal role in the re-establishment of the trade after the 1997 Asian currency crisis, after which the live trade to Indonesia came to a standstill for 12 months. He helped attract big new players like Tum into lotfeeding, rekindling momentum in the market.

He acted exclusively as the agent for Elders and the North Australian Cattle Co from 1985 to 2011, establishing PT Elders Indonesia in September 2000. He sat as director of the company from launch to 2004, and then as the Komisaris, until 2012.

He visited Australia on numerous occasions over the years, both to further his business interests with Australian exporter clients, and to speak on behalf of the Indonesian industry at live export conferences and gatherings.

Equally, when Australian delegations of producers, trade stakeholders and others visited Indonesia, he would often coordinate their itinerary, and generally provide logistical and personal support.

Pak Nurendro also actively engaged with the Indonesian Government on industry affairs through APFINDO, the Indonesian Cattle Raisers Association, of which he was one of the five original founders, and which he chaired for a lengthy period.

He was also associated with early Australian efforts to import and install restraining boxes in Indonesian abattoirs.

While Pak Nurendro had officially retired from his import/export agency business in recent years, he maintained close contact with stakeholders in both countries and ran his own small breeding cattle nucleus, bought from Australia.

An Indonesian-based Australian stakeholder who knew him well was the Richard Slaney, director of Elders Indonesia.

“Pak Nur was my mentor in those early years of Elders Indonesia. He was always calm and resolute when often we faced great uncertainty, and he always gave me a sense of ease with his guidance and years of experience. He was a very kind, warm and sincere man,” Mr Slaney said.

Another stakeholder with deep affection and respect for Pak Nurendro was Greg Pankhurst, cattle importer and lotfeeder from Juang Jaya feedlot.

“I remember meeting him in the early 1990s when he was with Kariyana. As a young Australian operating in a foreign country, he was always willing to be my sounding board for the many challenges and unfamiliar circumstances that I encountered in my early years in Indonesia,” he said.

“Pak Nurendro was highly respected amongst his peers in Indonesia and Australia, and it was common for the matters he raised to be sorted first at any round-table event or discussion. He will be greatly missed.”

Pak Nurendro had had some health issues over the past two years, but his passing during the weekend came as a surprise to his many friends and acquaintances, both in Australia and Indonesia.

The long-term success of Australia’s northern live cattle trade is in no small way indebted to Nurendro Trikesowo, for his sustained and deep contribution.