Members of PT Karya Angugerah Rumpin (Karawaci) team with Brooke Barkla, Manager of QA and projects at JJAA based in Lampung, and Dicky Adiwoso, JJAA shareholder and director and CPC partner.

INDONESIAN customers of Australian cattle have been recognised for their dedication to animal welfare through an awards program developed by the Consolidated Pastoral Co.

CPC is one of Australia’s largest cattle companies and a major stakeholder in the Australia-Indonesian cattle trade, running 400,000 cattle across 16 properties in northern Australia and owning and operating two feedlots in Indonesia. 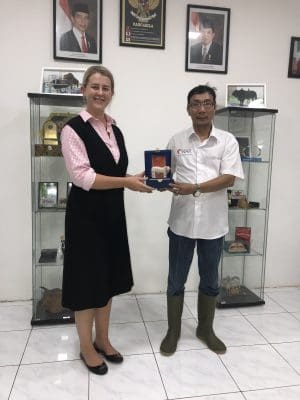 “The awards are a great opportunity for our Indonesian customers to showcase their animal welfare efforts and be acknowledged for their hard work and commitment to animal welfare,” Mr Setter said.

Thirty-two CPC/JJAA customers took part in the awards which were judged by the JJAA animal welfare and management team.

The customers were judged on their facilities, equipment, animal welfare indicators and the operational management of the cattle and the abattoirs. 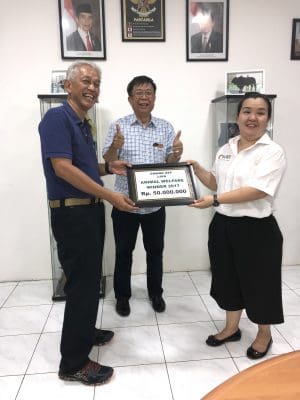 Mr Setter said CPC/JJAA has its own team of animal welfare officers in Indonesia training, checking and supporting customers every day, and also utilise independent auditors to check and test the company’s processes and systems as well as those of its customers.

For the second year running, CPC’s Indonesian operations have won MLA’s annual Feedlot Competition Champion for the feedlot’s efficiency of operations and management of cattle.

Mr Setter said two team members from JJAA were awarded with tickets to the BEEF Australia 2018 conference in Rockhampton, Queensland, and tours to Australian cattle production facilities where they learnt about cattle management and cattle nutrition and shared experienced between Indonesian lot feeders.