The current drought conditions in Australia have severely reduced the national breeding herd which will produce less annual sale-cattle for many years to come.

If some new customers enter the live cattle market such as China, Thailand and Cambodia then this reduced pool of sale cattle will need to be shared between a greater number of customers.

And finally, if/when it rains, a large proportion of feeder females will be diverted back into the Australian breeding herd to commence herd rebuilding.

The law of supply and demand dictates that when these three factors interact, the price of live cattle available for export from Australia must rise. The only thing that can’t be predicted with any accuracy is when, how far and how fast prices will move.

The graph below shows clearly that today’s prices (in AUD$) of live slaughter cattle in China, Vietnam and Thailand are all significantly higher than the price in Indonesia so it seems fair to assume that these customers could potentially pay more than Indonesia for live cattle. 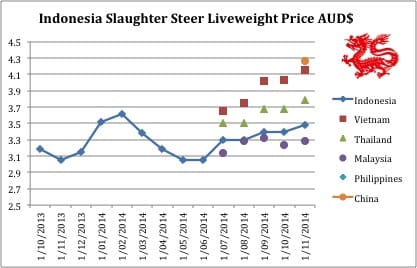 Within Indonesia, the feedlot industry is ironically having its capacity to increase domestic prices restricted by the same Australian drought conditions that are causing their feeder supplies to dry up.

At least for the short term, until the drought breaks, there will continue to be above average slaughtering of the Australian herd resulting in relatively low prices for processed beef.

This means that Indonesia, as one of Australia’s larger importers of box beef, will continue to be supplied with relatively cheap chilled and frozen processed product.

Recent history has shown that the Indonesian consumer will pay substantially more for beef if the prices rise slowly over a period of 6 to 12 months but only if all prices rise, not just fresh beef.

If there are plentiful supplies of imported box beef which are not increasing in price then the capacity for importers of live cattle to lift their prices to local butchers will be almost nil.

The breaking of the Australian drought will result in a rapid elevation in box beef prices which will end the flow of cheap product into the Indonesian wet markets but the lag phase required to slowly increase prices in the retail market will result in an extended period of low returns for lot feeders which could easily extend into 2016 if the drought doesn’t break during 2015.

Unfortunately, from the live cattle importers perspective, the option of live cattle from Brazil is simply not viable in the short to medium term at least.

Even if the Indonesian government ratifies the new law to accept livestock and beef from Regions of Brazil that are free of Foot and Mouth Disease (FMD), the Brazilian option is still unworkable.

The map below shows why. There is only one state of Brazil, Santa Catarina, that is declared free of FMD without vaccination. All the others are “free with vaccination” or infected. 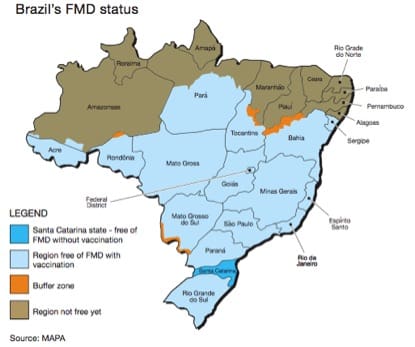 As a very large ship would be needed to help keep the cost of sea freight to a minimum, the large numbers of cattle required to fill these vessels would put so much pressure on the supplies in this single state (which holds only about 2pc of the national cattle herd) that the local cattle prices would be forced upwards to unacceptable levels.

Just to make things even more difficult, there is a great deal of new feedlot capacity, in both West Java and Sumatera, either recently completed, currently under construction or on the drawing board.

The managers of this expanding feedlot capacity will be forced to compete aggressively for shrinking supplies of higher priced feeder cattle, then have to find a way to sell the end product into a low priced market without making a loss!

During the last few days, the Indonesian Trade and Agriculture Departments have been meeting to resolve a range of issues surrounding the allocation of feeder cattle import permits for the first quarter of 2015.

At this stage (Monday 15th December) it would appear as though they have not been able to come to a final agreement.

The business of cattle importation is a complex one with extended timelines that need a great deal of forward planning to ensure ships and cattle supplies are sourced and delivered as and when required in the future.

If importers don’t know their import permit allocations well in advance of the coming quarter then their forward planning is thrown into turmoil.

For the Indonesian feedlot sector, the usual wet season storms are likely to be followed by lots of financial thunder and lightning for most of 2015 at least.