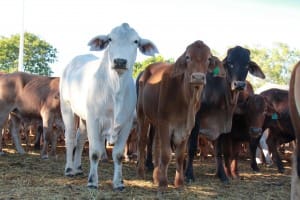 Last month, I wrote an article suggesting that the Indonesian live cattle importers would have a tough time this year with higher buy-in prices and restrictions on finished cattle price increases driven by plentiful and cheap imported box beef.

Please find that article, highlight it and click DELETE.

The new import permit policies have changed everything.

After extensive consultations between the Indonesian Ministries of Trade and Agriculture, the Trade Ministry has finally issued the new live cattle permits for the first quarter of 2015 and the effect will be dramatic.

If the first quarter is anything to go by, the numbers of live cattle imports permitted for 2015 will probably be significantly less than permitted in 2014 while the processed beef volumes are also expected to be reduced (but no confirmation as yet).

In addition, it has been unofficially announced that box beef imports have been restricted to the high value loin cuts with no secondary cuts (knuckle, topside, etc) or offals but some manufacturing beef (for bakso ball makers).

The new policies will remove any opportunity for high volumes of discounted boxed beef to keep a lid on prices in the wet market which represents 95pc of all retail sales.

When a dramatic reduction in both imported box beef and imported live cattle are combined with a shrinking domestic herd, supplies of beef for domestic consumption around the nation will be severely restricted.

The strong Indonesian economy means that demand will remain with the inevitable result of steadily increasing prices.

This is a very similar scenario to 2012/2013 when restricted import quotas forced domestic prices to record highs.

And the winners are…

The new losers are…

2015 Ramadan begins on June 18 and ends on July 17 followed by the Lebaran annual holiday.

Despite relatively large feedlot inventories at the present time, by the end of March 2015 most of these will have been sent to slaughter and the new, reduced number of Q1 imports will struggle to satisfy normal demand for Q2 consumption.

This leaves Q2 imports which can’t begin to arrive until mid-April at the very earliest, to supply the peak demand period of Ramadan and Lebaran from mid June to late July.

With the 350kg live weight limit, it will be virtually impossible to grow light weight Q2 feeder cattle to the required slaughter weight between late April and mid July.

The actual average imported weight at 350kg limit turns out to be around 310kg or less. Mid-April to mid-July is 12 weeks or and absolute maximum of 84 fattening days which is simply not enough time to turn 310kg into the optimum slaughter product. And many Q2 imports wont arrive until May and June. The reduced supplies of imported processed product will be of little help.

All governments around the world, including Indonesia, are keen to ensure that their citizens are provided with consistent and secure supplies of food at reasonable prices.

In addition, Indonesia has made it very clear that self-sufficiency (in beef and many other products) is a very high priority.

But the brief analysis presented above would suggest that imported supplies are being restricted, that the domestic herd will be under further pressure to sell females for slaughter and prices to consumers must rise.

The preliminary conclusion is that the new policies are not compatible with the desired outcomes.

A broader plan may be at play

There is however a school of thought that offers an alternative explanation that might provide the logic behind the recent announcements.

If prices are driven to extreme levels, as is likely by the end of Lebaran in July, then the political will to import processed beef from Foot and Mouth Disease infected countries with Regional Freedom might well get a much more favourable review.

Indonesian voters and lobby groups may well be more easily persuaded to authorise their government to find an alternative source of beef that will allow them to escape from their effective monopoly supplier, Australia.

The obvious alternative source in this case is Brazil.  But beef prices from Brazil are similar to those from Australia. Once imports of processed beef from Brazil are approved then the next step is the ultimate prize of cheap and plentiful buffalo beef from India.

The new policies that have been released last week could well be the first move in a much bigger chess game that might provide the Indonesian government with broad domestic political support to achieve its aims as stated above – to supply consistent and secure supplies of food (beef) at reasonable prices. From India.

It’s a game of risk and reward and both are huge. Perhaps the new government thinks that massive rewards will outweigh the risk. When it comes to ensuring 250 million citizens obtain the food they need at a price that is acceptable, the required moves around the chess board are complex and time consuming so if the goal is to be achieved then there is no time to lose. Game on?

In the unlikely event that this hypothetical scenario should ever come to pass, it still does not need to concern Australian producers because by the time any of these big moves take place, Australian beef and live cattle will be enjoying tighter supply conditions at the same time as demand is increasing from a much broader range of international customers.

Australian producers will never again be short of buyers and forced to dump the best beef in the world into the global market place at bargain basement prices.