Jokowi poised to be named Indonesia’s next president 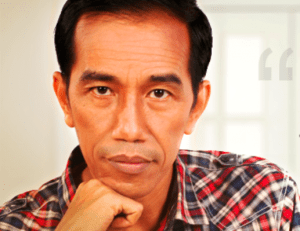 Jakarta Governor and former furniture manufacturer Joko Widodo is poised to be announced as Indonesia’s new president when the official election results are released this afternoon.

However there is also strong speculation his rival, former military leader Prabowo Subianto, will challenge the count in the Constitutional Court, which could delay finalisation of the result for another month.

News reports from Indonesia suggest that today’s announcement will confirm that Jokowi, as he is popularly known, has won 71 million of the 132.9 million valid votes cast on July 9, or 53pc.

It has been reported that more than 255,000 soldiers and police have been deployed across the nation in anticipation of possible public unrest when the official result is confirmed.

Indonesia’s new leader will not be sworn into office until October 20, when Dr Yudhoyono leaves the presidential palace after serving the maximum two five-year terms.

Dr Yudhoyono has urged whoever loses to accept the defeat “peacefully”.

“Admitting defeat is noble,” he said, according to ABC news.

“If there is someone who does not accept the official result, I would advise them to peacefully go the constitutional route.”

“That relationship also underpins significant economic activity including jobs across northern Australia and rural Indonesia – we have heard it said that for every one job in an Indonesian feedlot, another seven are created in the surrounding local community.

“We expect this to continue and look forward to working with the new administration.”