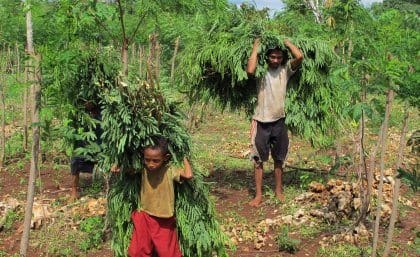 Leucaena is harvested in eastern Indonesia, before being fed to cattle. Image: Max Shelton

INDONESIAN journalists recently visited The University of Queensland to hear about a successful cattle fattening project in their nation’s east which is bringing significant economic benefits for smallholder cattle farmers.

“It has trained 60 Government staff and 80 farmer leaders, and distributed 2000kg of improved leucaena fodder tree seed grown and sold by Indonesian smallholders,” he said.

“In essence, farmers in eastern Indonesia have planted a new UQ-released variety of leucaena in a project sponsored by the Australian Centre for International Agricultural Research,” he said.

“The farmers cut and fed it to their cattle, which got very fat as a consequence and were then sold for a profit.

“The project demonstrated that it is possible to greatly increase smallholder cattle productivity in Indonesia by improving nutrition with forage tree legumes.”

The variety of leucaena planted was Tarramba. Dr Shelton said it tends to be arboreal in habit (tends to grow tall with single stems), and requires height management in Australia, which is entirely possible, but it is not always well appreciated for that reason. However, it is perfect in Indonesia as it they like to harvest it high and manually at about 1.5-2m. This ensures its protection from smaller farm livestock. 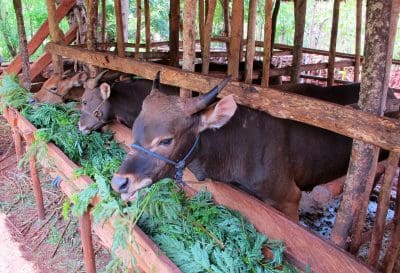 “The project aimed to lift the productivity of fattened cattle to meet the increasing demands of the Indonesian population, as an important way to improve the incomes of the rural poor,” he said.

The value of forage tree legumes had been demonstrated repeatedly throughout the tropical world.

“More than 200,000ha of leucaena pastures have been planted in Queensland to meet graziers’ needs for a highly productive and profitable system producing superior quality ‘grass-fed’ beef,” he said.

“This experience was used to promote the uptake of tree legumes in Indonesia.”

Dr Shelton said the project demonstrated that growing and feeding leucaena could halve the amount of labour needed to look after cattle – and double live weight gains.

“These impressive benefits are driving the adoption of the system,” he said.

“There is an opportunity to extend the use of this system to many thousands of smallholders in eastern Indonesia.”

In response to potential concerns from people involved in the Australian live cattle trade that this work may be undermining that industry, Dr Shelton said he believed the work was enhancing trade.

“We are not threatening the trade into Indonesian feedlots as our work was directed at the smallholder sector, and overall, Australian aid to the Indonesian cattle industry is building mutual trust and confidence.”