Indonesian ministers meeting in Jakarta this week have reportedly set 2016 cattle import quotas at 600,000 head, slightly below the volume imported in 2015.

And in contrast to earlier reports that Indonesian ministers were planning to move to a four-monthly permit allocation system to improve supply certainty, in response to Australian industry requests, the ministers have announced permits will continue to be issued every three months.

The news follows a meeting on Monday between Indonesia’s ministers of trade, agriculture and economic coordination, where import requirements for a range of commodities in 2016 including cattle, beef, sugar, corn and soy beans were discussed.

There have been varying reports about the outcome of the meeting in Indonesian media, with one local news agency quoting Indonesian trade minister Thomas Lembong saying that Indonesia will import 700,000-800,000 cattle in 2016, while other agencies are citing the figure of 600,000 cattle announced by coordinating minister for economic affairs Darmin Nasution.

Which figure to believe? Indonesian trade sources contacted by Beef Central this week appear to be treating the latter, lower figure as the real number.

Importers are still yet to receive official permits in their hands, but now have a clearer indication as to likely volumes for the first two quarters.

Darmin Nasution said permits will continue to be issued on a quarterly basis, with the first quarter in the lead up to Ramadan likely to comprise “slightly more than 200,000 cattle” and the second quarter likely to total 150,000.

He also indicated that Indonesia expects to import around 50,00 tonnes of boxed beef in the new year.

Large parts of the north are awash after the system dumped as much as 600 millimetres of torrential rain across parts of the Top End, Barkly and into the western Queensland Gulf.

David Connolly tweeted the below picture from Tipperary Station near Daly River on Christmas Day, where 865mm (more than 36 inches of rain) was recorded in 96 hours. 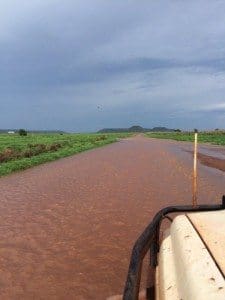 With more rain on the way, significant parts of the northern supply area are now likely to be cut off by water and inaccessible for some months.

More details on Indonesian import permits for 2016 will follow as they are confirmed.