Feedback from the live cattle trade suggests the recent introduction of imported Indian buffalo meat into Indonesia is having a much bigger impact on demand for Australian live cattle in the country than many may have thought. One large cattle importer has told Beef Central his business is experiencing a 30 to 50pc reduction in fresh beef sales due to the substitution affect of frozen Indian carabeef with locally fed beef, depending on the area.

Exporters are also commenting that sales to importing customers have slowed noticeably, due to the increased supplies of Indian meat in the market and the fact importers are still operating at losses due to the current high cost of importing Australian cattle.

“January/February are the classic months to stock up for Lebaran, but we are seeing importers drop orders because the demand from their customers for supply is quite soft up there,” one exporter told Beef Central.

It has also been reported that Indonesia still intends to import another 48,000t of buffalo meat within the next six months.

Working on a yield of 200kg of beef for every 350kg feeder steer exported to Indonesia, that volume represents the equivalent of 240,000 Australian live cattle.

There is the potential for over 100,000 tonnes of Indian buffalo to enter Indonesia by the end of this financial year (June 30, 2017), because permits already been allocated for these volumes.

Despite the large volumes of Indian buffalo meat entering the market, there are also signs that it is not achieving what it is intended to achieve, which is to lower the price of beef for consumers in Indonesia.

Not selling for low prices intended

The Indonesian Government is trying to keep the price of beef in Jakarta below 80,000 Indonesian Rupiah per kilo, and in some areas has set up its own stalls selling Indian buffalo meat for around 65,000 IR/kg.

However, the average national price of beef in Indonesia last week still stood at 112,000 IR/kg, according to Indonesian media.

One exporter explained that a wet market butcher who might normally buy 10 finished Australian cattle from a feedlot each week might now only buy four, substituting the balance with cartons of defrosting Indian buffalo meat, and selling a combination of both depending on what his customers are prepared to accept.

Many traders are also said to be selling Indian buffalo meat at prices just under the price of local fresh meat, as they endeavour to keep the margin for themselves and not pass it on as cost-savings to customers, as the Indonesian Government intends.

When frozen Indian buffalo meat began legally entering the market about six months ago, there were theories around whether it would make its way into wet markets or bakso factories, but it now seems to be getting into both, which is having a negative impact on fresh beef sales, without having the desired effect of helping to lower beef prices.

“No one is getting what they want here,” an exporter commented. “The only person getting rich is the wet market meat trader.”

Boxed beef impact – next three months will be critical 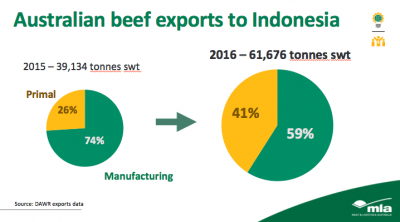 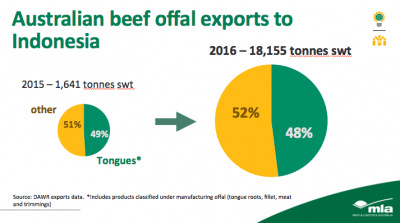 However, despite the impact of Indian buffalo meat, exports of boxed beef from Australia to Indonesia increased in 2016, according to Meat & Livestock Australia.

Australian shipped tonnes of beef and veal to Indonesia in 2016 totalled 61,676 tonnes, up quite substantially from the 39,134t shipped the previous year.

MLA’s international business manager for Southern Asia Andrew Simpson said a number of complexities are likely to have influenced this result, and not necessarily related to Indian buffalo meat.

For example, he said, increases were somewhat attributable to less restrictive access by Indonesia on beef imports, allowing for increased imports of secondary primal cuts throughout 2016.

Up until December there were no significant drops in primal cuts.

However, Mr Simpson said the next three months will provide a critical assessment of where boxed versus Indian buffalo meat ratios find a place in the market.

He said there had been some concerning indications by December from Australian exporters reporting slowing signs on boxed exports.

Another factor that may have contributed to increased boxed beef exports from Australia to Indonesia last year was that imported boxed beef has remained price-competitive against local beef and live cattle options.

Also delays in live cattle exports, caused by the transition to Indonesia’s new breeder-based cattle import permit system (see separate article) and permit hold-ups, had created a market shortage that has been at least partly filled by imported boxed beef, but also affording an increased opening for buffalo meat supply

Final live cattle export data for 2016 which was announced this morning showed that Australia shipped 596,000 cattle to Indonesia in 2016, slightly down on 2015 exports.

To clearly assess the impact of Indian buffalo meat on local cattle and beef demand in Indonesia, MLA has initiated a series of surveys which are running from October to March.

Information will be obtained from survey results across 200 meat sellers in 40 Jakarta wet markets.

Mr Simpson said it was too early to discern any clear trends, but as soon as the survey is completed, MLA will provide further information on the outcomes and insights and finalise a strategic response.

“It is too early to second guess this data at this stage, as the variables of politics, price and demand in lead up to Ramadan all have unknown influence,” Mr Simpson said.