John Cunnington, Halleen Business Development and Marketing Assessment Manager, has been recognised as the livestock export industry’s 2019 Young Achiever of the Year. 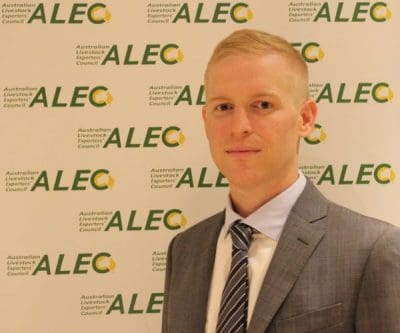 Mr Cunnington was named as the winner at the LIVEXchange Gala Dinner in Townsville on Thursday night.

“John is committed to the industry, its future and his role within it. He believes in the live export Industry and its long term sustainability,” says Ian Halleen, Managing Director of Halleen.

“The livestock export industry’s recognition of exceptional young achievers reflects exporters’ commitment to innovation, leadership and world-leading practices. John is committed to the industry, its future and his role within it. He believes in the live export industry and its long term sustainability,” says Mr Harvey-Sutton.

“The Australian livestock export trade relies on the passionate, professional men and women working across the industry and throughout the supply chain. We congratulate John on his outstanding contribution to our industry and look forward to his ongoing contribution in the years to come.”

Mr Ingle, himself a previous Young Achiever award winner, described Mr Cunnington as an exceptional candidate who has shown commitment to the livestock export trade, participating in boards and committees in a voluntary capacity outside of his current role.

“John is a well deserving candidate and we look forward to watching his career further progress.”