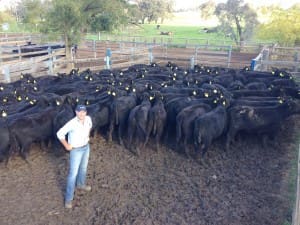 Frontier’s Southern Livestock Manager George Last on farm with some of the Angus Heifers destined for China.

Frontier is the new live export division established by Ruralco Holdings in December 2013.

Since delivering its first shipment in May, Frontier managing director Hamish Browning said the company has now shipped close to 30,000 cattle from Darwin to markets in South East Asia.

The departure from Portland on Sunday night of the MV Dareen carrying 6500 heifers for China marked the company’s third consignment from Southern Australia to the Northern Asian region.

The consignment comprised Angus, Holstein and crossbred dairy breeding cattle destined for Dalian in northern China and was the largest so far for Frontier’s southern operations.

The 6500 heifers for the most recent shipment to China were sourced predominantly from producers in Victoria, southern NSW and the South East of South Australia. Mr Browning said Ruralco’s other livestock businesses including Rodwells, Dairy Livestock Services, SA Livestock, & Platinum Operations all played a key role in sourcing cattle for the shipment.

“Executing a shipment of this many quality breeding cattle is no easy task and it has taken a great deal of hard work by our people who have established a strong supply program built on the foundation of our quality focus.”