The Federal Court of Australia has issued further orders for the sale of the livestock vessel “Yangtze Fortune”, which has been arrested at Portland in Victoria. 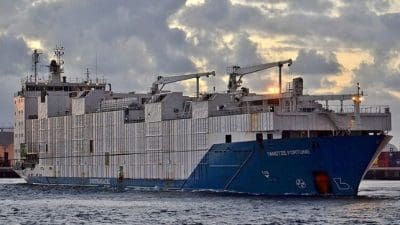 Having given initial orders on December 20, 2022, that the “all but abandoned” ship be auctioned to recover unpaid funds, Federal Court Justice Stewart has issued further orders specifying that Australian Independent Shipbrokers (AIS) be appointed as brokers in the sale.

The sale is to be conducted by closed tender, with tender bids due by 5pm AEDT, February 10, 2023.

The ship was arrested in early December at Portland by Australian Government officials for alleged non-payment of bills by its owners.

At the time 36 crew members were still on board the anchored vessel, with allegations the stranded seafarers had been on the ship for three months with wages unpaid for at least six weeks. See earlier article here.

Beef Central understands that arrangements were underway at Portland today to enable the 19 remaining crew members on the vessel to leave the ship and return home.

That follows an additional Federal Court order issued yesterday, directing the Admiralty Marshal “to take all necessary steps to move the defendant ship “Yangtze Fortune” from anchorage to the Portland Pilot Boarding Ground area, with the vessel to remain underway to facilitate the safe disembarkation of 19 crew members for the purpose of their repatriation.”

“Following the disembarkation of the crew, the defendant ship may remain underway to discharge disinfected and treated sewage in accordance with MARPOL discharge standards, at a distance no less than 3 nautical miles from the nearest land, while the ship is proceeding en route at a speed not less than 4 knots,” the January 18 court order states.

“Immediately following the discharge of disinfected sewage, the defendant ship shall return to anchorage.”

Originally built in 2005 as a container vessel, the 132m LOA/4800dwt “Yangtze Fortune” was converted to carry livestock in 2015 and has been trading between Australia and China.

She arrived off Portland, Victoria in September 2022 where she has remained since being arrested in December 2022.

The sale is being conducted in accordance with the Admiralty Marshal’s terms and conditions of sale which can be obtained from Australian Independent Shipbrokers.

“Although the effect under Australian law of this judicial sale is to free the ship from all liens and encumbrances and debts up to the date of the sale, no warranties are made by the Admiralty Marshal as to the effect of this sale under any foreign laws and/or foreign jurisdiction,” AIS said in a statement.