The new KLTT ship’s hull will have similar lines to that of Wellard’s Ocean Drover.

THE world’s fastest live export livestock ship will reportedly be built in Croatia as part of an $80 million contract with Kuwait-based Livestock Transport and Trading Co. KSC.

The new faster and more animal welfare-focussed ships will be designed to replace its mostly sheep-specific vessels, Al Messilah and Al Shuwaikh, giving the company the flexibility for live cattle and/or sheep shipments to service markets in China, South East Asia, the Middle East and also Iran, Egypt and Turkey.

In Total Croatia News last month, marketing director for the Pula-based shipyard Uljanik, Serđo Pajković, said the first ship would be the fastest ship for the transport of livestock in the world, with a speed of almost 20 knots.

The ship, the first in the series to replace the KLTT fleet by 2020, will be “a floating hotel for animals” over 180 metres long and with 28,000 square metres of cargo space. It will be able to transport 80,000 sheep or 10,000 cattle and 23,000 sheep, and will connect Australia and the Persian Gulf, Total Croatia News reported.

“It is a special ship which will satisfy the strict Australian regulations”, Mr Pajković said. 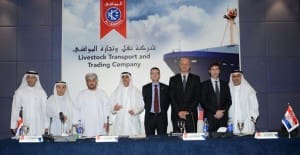 KLTT and Uljanik Shipyard representatives with the Australian Ambassador, Mr Warren Hauck, at the media conference in Kuwait.

KLTT chief executive officer Osama Boodai said company chairman Bader Al-Subaiee and Mr Pajković signed the contract for the first and largest vessel in the new fleet. It is due to be delivered in July 2017.

“The new vessels will give the company the flexibility to offer increased cattle capacity for the growing Chinese and South East Asian markets, as well as our traditional Middle East markets, but possibly including Iran, Egypt and Turkey.

“This new vessel has been designed with animal welfare foremost in our minds and confirms our commitment to the trade with Australia.”

Rural Export and Trading general manager in Australia, Mike Gordon, said the support of the Australian government had given the company confidence that the industry is valued and that such a large investment is warranted.

The hull design of the new ship will be very similar to that of the Wellard Group’s Ocean Drover. The company exports 1-1.5 million live sheep annually, but its current vessels are designed to take 10,000 sheep each and just 600-800 cattle per shipment.

“There is much greater cattle capacity in the new ships, which gives us the flexibility to operate into South East Asia,” Mr Gordon said.