FAMILY and friends of two Australians who were on board the Gulf Livestock 1 which is believed to have sunk in the East China Sea during a typhoon nine days ago have issued pleas for the Australia Government to intervene after Japan called off its full-time search for survivors overnight. 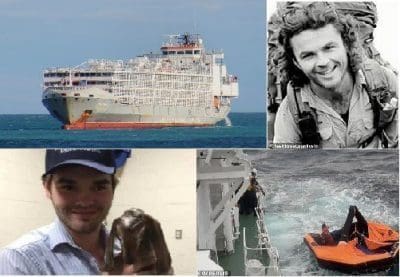 A petition has been created on Change.Org calling for the search to resume, and currently has over 24,000 signatures.

New Zealand’s Ministry for Primary Industries has today launched a formal independent review into the transport of livestock by sea from the country.

Mr Katter said Lukas Orda’s family was advised by the Australian Consular Emergency Centre on September 7 that one of the two rescued survivors had supplied the following information to the Philippines Consul-General (Osaka) indicating other crew members had entered lifeboats:

‘When the engine of the ship failed in the storm the captain called all crew on the bridge in life vests to enter the lifeboats, three crew could not reach the bridge and were washed overboard. When a big wave hit the ship and pushed it on the side the second survivor was washed off the bridge and lights went off.’

Mr Katter said that from the information provided by rescued crew members there are still four life rafts and one lifeboat which have not been found or accounted for, and there have been no sightings of any other dead bodies of the remaining 40 crew.

He said this information had left the Orda family believing survivors were still out there. Mr Katter said he didn’t think anything short of the Prime Minister’s intervention would get a breakthrough and the full search resumed.

“We contacted the PM’s office late yesterday afternoon in relation to the suspended search for the Gulf Livestock 1 ship after a typhoon south-west of Japan.

“The PM must call the American Navy for any nearby vessels to start a search,” he said.

“We have Australian parents sitting at home in Mount Isa pleading with our Government to intervene when there is a better than 70 per cent chance that that boy is on a raft out there somewhere and possibly alive.

“We spoke to the Foreign Affairs Minister to advise her personally of the situation. We have also spoken with the Japanese Ambassador in Canberra who has put a terrific effort in in finding them during the typhoons but you just can’t see anything in those conditions.  So we are renewing our efforts through the Prime Minister in asking them to throw all efforts at finding these men.

“When the Malaysian Airlines plane went down, MH370 we searched for three months to two years and tens of millions was spent. A search with a huge swell in the sea would be very iffy at the best of times. We must do everything we can to find this young man. His family is well loved and respected.

“There will be a very angry response from the people of Australia if these boys are left out there, he said”

Queensland KAP Member for Traeger Robbie Katter supported the Orda family as they read out a statement to media in Townsville today.

“We’ve been in contact with the Orda family for the past week and been through the ordeal with many people in the North-West Queensland community and all those people touched by Lukas,” Mr Katter said.

“On the evidence that’s there at the moment, I think there’s a very good reason to keep searching; four life boats are still unaccounted for and people can live for up to 30 days on a life boat.”

He said all resources needed to be thrown at the search effort.

“We are appealing directly to the Prime Minister and the Minister for Foreign Affairs for immediate assistance.

“We need to deploy whatever assets are available. We owe it to these people to keep searching.”