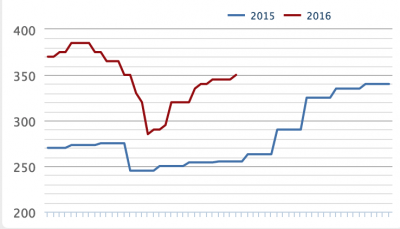 Livestock ships are leaving Australia to find work in other parts of the world as the supply of export cattle dries up.

The tightening supply of cattle was highlighted in the latest edition of Meat & Livestock Australia’s monthly LiveLink report, which revealed a 21 percent year-on-year decline in live feeder and slaughter cattle exports for the January to July period.

The big improver for the period was the number of southern breeding cattle shipped to China – a 64 percent rise to just over 45,200 head.

In northern Australia exporters are finding it harder to source the numbers they need to fill orders for Indonesia and Vietnam.

Prices have been gradually lifting as they attempt to lure more stock out of the woodwork.

Live export steer prices in Darwin are now being quoted at around 350c/kg, up from 285c/kg just over three months ago in early May.

A number of exporters who have had ships on fixed charters are reportedly not renewing those lease agreements as they are coming back up for renewal.

Sources within the live shipping trade, who asked not to be directly quoted, confirmed that with difficulties sourcing required numbers, and the impact of high cattle prices on their margins, some exporters were redelivering vessels that had been time chartered.

Instead they are moving to voyage charter tonnage when it makes financial sense to conclude a trade.

“The lack of cattle supply is impacting on vessel employment and for this reason ship owners are looking at repositioning their vessels to markets outside of Australia,” one shipping trade source said.

Further pressure on supply will come with the new allocation of permits for the final trimester of the year, which starts in less than two weeks on September 1.