ESCAS report: Where does livex stand on pre-slaughter stunning? 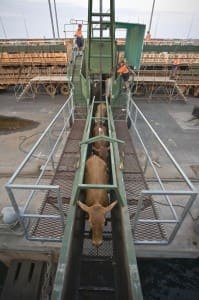 The livestock export trade may have earned a positive report card from the Federal Government for its efforts to improve animal welfare outcomes last week, but leading animal welfare group the RSPCA remains unmoved on its opposition to the trade.

The Federal Government report found that since continuous through-chain tracking of exported livestock was introduced via the Exporter Supply Chain Assurance System in 2011, more than 8,000,000 exported sheep, cattle, goats and buffalo have experienced positive welfare outcomes.

However, it said the mandatory system was still failing in places, with 12,968 head of livestock exposed to either proven or potentially adverse welfare outcomes.

Of these reports of non-compliance, which ranged from minor to major breaches, 41 percent were detected by the Department of Agriculture through mandatory reporting and auditing systems; 31pc were self-reported by exporters and 19pc were reported by a third party or external source, such as animal welfare and animal rights groups.

Allowing unstunned slaughter was much more than just a ‘potentially adverse animal welfare outcome’, as described by the report, the RSPCA said, it was “horrific cruelty”. The RSPCA’s full response can be read here on its website.

In response to the RSPCA’s concerns, Beef Central asked the Australian Livestock Exporter’s Council (ALEC) to explain the industry’s policy on the use of pre-slaughter stunning and full inversion boxes.

She said it was difficult to provide an exact figure on the rate of pre-slaughter stunning in foreign markets, but said the majority of cattle exported from Australia were stunned prior to slaughter.

Pre-slaughter stunning was in use in Vietnam, Japan, the Philippines, Malaysia, Indonesia, Jordan, and electrical stunning had more recently been approved for use in Egypt (for both sheep and cattle), as a result of industry work with local welfare groups.

She said there was obviously less use of stunning when it came to sheep and goats but pre-slaughter stunning was used in Jordan.

Ms Penfold said the industry will continue to encourage the use of stunning.

“Clearly where there is no religious objection we use it as a slaughter practice,” she said.

“That said, we have been successful in getting electrical stunning accepted as halal. That is a good step forward for the Middle East/North Africa (MENA) region.

“As the ESCAS report states, Australia cannot impose standards on other countries that are not adopted at home.

“As non-stunned slaughter is permitted and used in Australia (largely for halal products so essentially for the same reasons as overseas) we cannot impose stunning on other markets.

“Any use of non-stunned slaughter must be undertaken as per the OIE code (Chapter 7.5 of Terrestrial Animal Health Code).”

ALEC does not have a formal policy position on inversion boxes, Ms Penfold said.

This was in large part because of the “extremely limited” use of inversion boxes in ESCAS approved abattoirs.

Ms Penfold said the only inversion boxes of which she was aware were in use in approved supply chains are Israel where two are used for Kosher slaughter and one in Turkey.

She said ALEC supported the humane slaughter of livestock and worked to achieve that aim in all markets.

“We recognise and respect that some markets use religious slaughter techniques requiring different types of restraint equipment,” she said.

“While inversion boxes meet the current OIE standards and have been approved for use by the Australian Government in ESCAS supply chains, we recognise that if the boxes are not operated correctly or maintained in working order, there is a higher risk of unnecessary stress and suffering to livestock during the slaughter process.

“We are actively focused on ensuring whatever method of slaughter is used it meets the standards and is done as humanely as possible.”

Position on restraining methods of other nations

While compliant with OIE requirements, the European Union only allows the use of inversion boxes in certain circumstances. The Official Journal of the European Union, COUNCIL REGULATION (EC) No 1099/2009 of 24 September 2009, section 2, Article 15, identifies that…

“Systems restraining bovine animals by inversion or any unnatural position shall not be used except in the case of animals slaughtered in accordance with Article 4(4) and provided that they are fitted with a device that restricts both the lateral and vertical movement of the head of the animal and are adjustable to be adapted to the size of the animal.”  Importantly, Article 4.4 states… “In the case of animals subject to particular methods of slaughter prescribed by religious rites, the requirements of paragraph 1 shall not apply provided that the slaughter takes place in a slaughterhouse.”

The US has similar requirements in terms of only allowing the use of inversion boxes for religious purposes.

In Australia, inversion boxes are not used but are not banned.  It is understood that the domestic processing industry has an agreement with local rabbis that Kosher slaughter can be done without them.