FEEDER and slaughter cattle live exports in July reached just below 40,000 head, as Australian livestock exports continue to be restricted by a variety of domestic and in-market challenges.

The monthly LiveLink live export summary produced by MLA and Livecorp released this morning shows that for the calendar year-to-July 31, feeder and slaughter cattle exports to all markets were down 36 percent, compared with the same period last year, totalling 385,000 head. 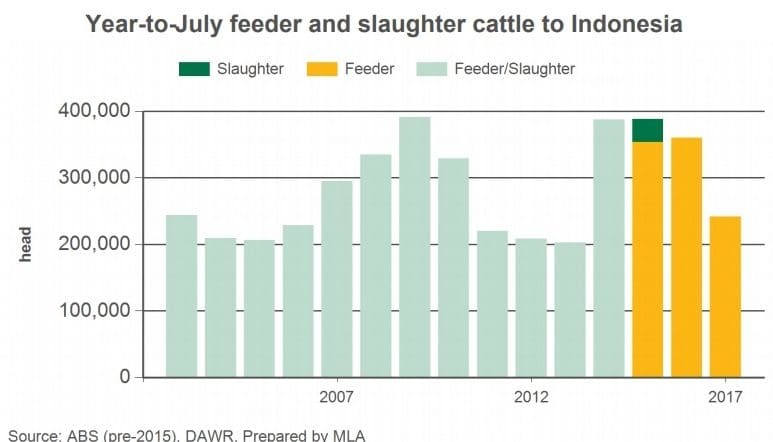 Year-to-July feeder and slaughter cattle exports to Indonesia declined 33pc year-on-year, to 242,000 head. High Australian cattle prices, the Indonesian government’s agricultural policy goal to achieve self-sufficiency for major commodities including beef, along with price stabilisation methods that has enabled the supply of Indian Buffalo Meat (IBM) are the prominent factors in reduced livestock exports to the country.

For the calendar year-to-July, it is reported that 55,000 tonnes of IBM has been imported into Indonesia, with Indonesian Bureau of Logistics (BULOG) holding permits to bring IBM imports by December 2017 to 110,000 tonnes.

Current wet market prices for IBM in the Greater Jakarta area continue to vary and range from IDR 80,000-110,000/kg, while fresh beef trades at a premium from IDR 115,000-120,000/kg. Recently, prices have remained stable despite in-market reports of increasing availability of IBM and higher prices for both local and imported cattle. 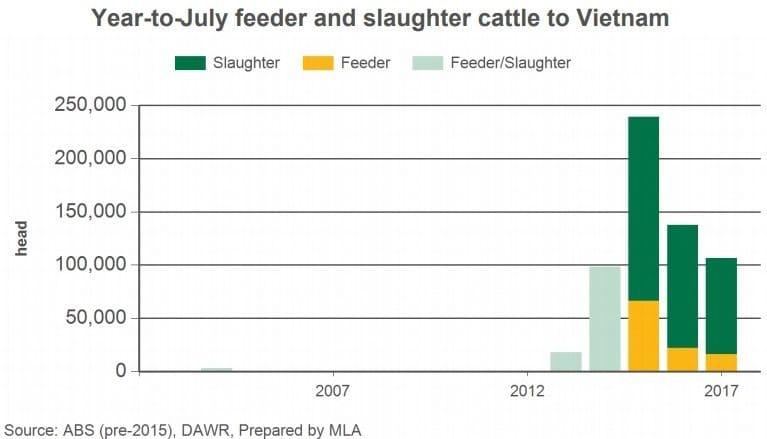 High Australian cattle prices are a contributing factor in the marked decline in live export numbers being sent to Vietnam. MLA estimates 150,000 head will be consigned to this market in 2017, with further reductions possible due to market instability and poor profitability.

Total live goat exports for the calendar year-to-July were 6457 head, LiveLink reported, down 81pc compared to the same period last year. The drop is due to the sharp decline in exports to Malaysia which has resulted from the seasonal reduction in supply and high prices of Australian slaughter goats, along with availability of cheaper goats from Thailand and Myanmar.