THE internet is having an impact on what we buy as well as how we buy it, with social media accelerating awareness of social and environmental issues in all countries, particularly with younger consumers.

Global food industry expert Emeritus Professor David Hughes, from Imperial College London, says these days, 20-somethings have more in common with their age group across the globe than they do with their parents’ generation. 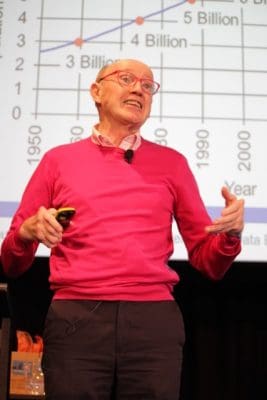 “Everyone wants tasty, affordable and healthy food for their family. However, it’s not just high income families who also want food that’s good for the local economy and the environment,” Prof Hughes said.

“The red meat industry in particular is under scrutiny on several fronts, including human health, greenhouse gas emissions and animal welfare,” he said.

Prof Hughes will be one of the keynote speakers at the livestock export industry’s national conference, LIVEXchange 2019, being held in Townsville on October 30-31. He says half the world is eating more meat, while the other half is eating less.

“Globally, protein demand is still growing, especially cheaper sources like chicken, some farmed fish, and eggs. Beef is more expensive, so while consumption is increasing, it is at a slower rate.

“In emerging countries, which are some of the key markets for livestock exports, growth is expected to continue as long as incomes continue to rise. Wealthier countries are the ones eating less, but they’re eating better.”

As sustainability continues to grow as an issue, Prof Hughes says the international purchasing power of global corporations will supercharge its influence.

“Average consumers in Vietnam may not care what the fried chicken from their local takeaway was fed or how it was raised, but the buyers of fast food chains are already making value judgements on their behalf.

“Social pressure is mounting on the ‘can’t eat’ list, with some people claiming you can’t eat Brazilian beef because it is destroying Amazonian rainforests, that you can’t eat prawns from Thailand because they were caught with slave labour – and the list is getting longer.

Customers of Australian livestock were positive about what the industry has to offer, but pressure would continue to mount on every type of meat production, not just from special interest groups.

“The key to success is working out how to shape the industry to compete for that growing protein demand for five, ten, and many years into the future,” Prof Hughes said.