THE Department of Agriculture, Water and Environment says it is considering calls by animal rights groups to introduce real-time Departmental monitoring of CCTV in foreign abattoirs processing Australian livestock, following the latest alleged breaches of Australian live export regulations in Jordan and Indonesia. 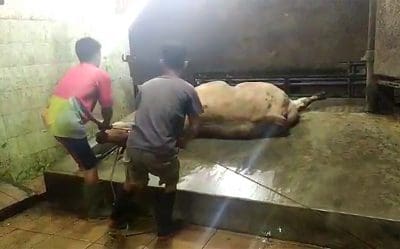 An image from an Animals Australia video showing cattle being slaughtered using a Mark I box in Indonesia. The footage is being investigated by the Department of Agriculture, Water and Environment.

The RSPCA has written to Federal Agriculture Minister David Littleproud regarding the complaints that include allegations Australian sheep were found in at least 10 locations outside of approved supply chains in Jordan, and Australian cattle were subjected to brutal roping slaughter, including the use of the prohibited Mark 1 box, in Indonesia.

The RSPCA says it is seeking “urgent measures” in response to the recent allegations including:

In response a Department of Agriculture, Water and Environment spokesperson told Beef Central the Department is aware of the RSPCA’s recommendations and “will consider them, including CCTV in abattoirs”.

The Department said the use of unique individual animal identification for the traceability of exported sheep and goats was considered when ESCAS was being developed in 2011.

“At that time, there was no national system in Australia that uniquely identified individual sheep and goats in Australia – a situation that remains today.

“Should individual identification of sheep and goats become mandatory in all states and territories of Australia then we will be in a position to require it in exported sheep and goats.”

On the back of the RSPCA’s call earlier this week for CCTV in export abattoirs to be monitored by the Department of Agriculture, Animals Australia yesterday released footage to media of cattle being slaughtered in Mark I boxes in two Indonesian abattoirs, which formed the basis of a complaint lodged with the Department last week.

An Animals Australia spokesperson said the group had decided to release the footage publicly upon discovering that the two facilities the footage in Indonesia were ESCAS approved and were audited by the industry.

A spokesperson said a major flaw in ESCAS is that approved facilities can kill non-Australian animals in unacceptable ways, such as via the Mark 1 box in Indonesia or via sledgehammering in Vietnam, while requiring Australian animals to be killed in another method in the same facility.

It was unrealistic to expect this would be adhered to on a nightly basis and was a key reason why real-time CCTV accessible to the regulator was required, the spokesperson said.