The first step in trialling dehumidification and other technology on livestock export vessels is underway, with environmental monitoring equipment being installed on a ship in Fremantle this week. 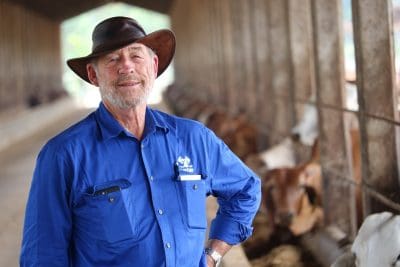 Terry Enright, Chair of the industry’s research and development body, LiveCorp, said the project has the potential to substantially shift the paradigm for the industry, but is high risk research which still has to be proven on a livestock vessel.

“The sensors being installed will measure temperature, humidity, and volatile gases like ammonia and methane, to collect baseline data during one of the last sheep voyages to the Middle East before the northern summer moratorium comes into effect,” Mr Enright said.

“The same ship will be used for a trial in the Middle East in June or July without livestock, involving air being pumped into two decks from dehumidification units mounted on a wharf to see whether it’s possible to reduce the wet bulb temperature at different ventilation rates.”

The project has been running for more than 12 months, and takes a completely different approach to finding a solution for one of the industry’s key issues.

“Ventilation experts, ship owners and exporters have told us for many years that it’s just not possible to air condition livestock vessels, because air conditioners rely on stable, low air turnover while animals need a large volume of air movement to remove the gases being produced,” Mr Enright said.

“However, technology continues to evolve and many industries have gone from simply opening a window or turning on a fan, to different ways of controlling environmental conditions. For this project, we engaged with global innovators and start-ups to identify existing solutions that might be adapted to the unique conditions of our industry.”

The initial open call resulted in more than 120 enquiries from across 16 countries.

Technologies shortlisted for trial this year also include route optimisation and a rapid cooling spray that draws heat out of metal and other materials.

Mr Enright said other factors also need to be considered if the technology works, such as the cost of installing and running the dehumidification units on livestock vessels.

“If the static trial is successful and we’re confident we can manage potential risks, another trial will be planned with the equipment installed on a ship for a commercial voyage with livestock on board.

“There’s still a long way to go, but this may ultimately allow Australia to continue its role as a valued partner in supplying the Middle East and contributing to food security, as well as providing an important market for sheep producers in Western Australia.”

The project is being funded through a grant of $2.2 million, announced earlier in the year by Minister for Agriculture, David Littleproud.

It builds on 20 years of research into heat stress conducted by LiveCorp and Meat & Livestock Australia, with in excess of $3 million invested into projects relating to understanding and mitigating the risks.

This includes the development of the Heat Stress Risk Assessment (HSRA) model, which has been recognised by the recent ASEL review as having undoubtedly improved animal welfare and reduced heat stress risks and mortalities on voyages to the Middle East.

Earlier article: If a Qatar stadium can be air-conditioned, can a livex ship be dehumidified?