When will the 40 year long oversupply situation come to an end and give the long suffering Australian beef producers a decent return for their hard work and investment?

Connect the dots below to discover the answer.

Sometime around 2010 dramatic changes occurred with China’s supply and demand for beef and live cattle.

The first map shows the traditional direction of flow of live cattle traded around continental South East Asia for the 50 years leading up to 2010. The second map shows today’s trade flow patterns. 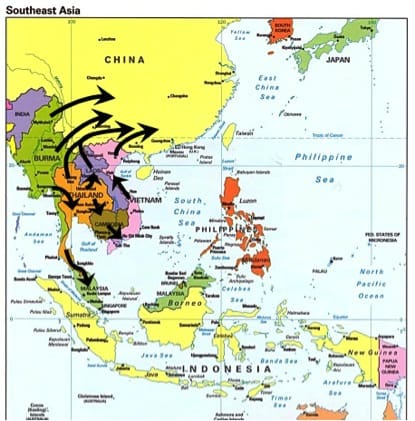 For the first time in the 50 year history of the trade, live Australian slaughter cattle delivered to Malaysia are cheaper than the small number of imports still brought across the border from Thailand

Now that China has almost exhausted the supplies of live cattle from its own herds and its southern neighbours, the next stop is Australia.

Our proximity allows China to buy live cattle from Australia as well as processed beef.

This gives the Australian industry a significant advantage over the rest of the world.

Once live exports to China begin to flow, demand will finally outstrip supply and the Australian producer will, at long last, get a fair return for his efforts.

Not long to wait now.