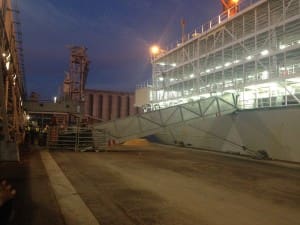 Live export ship the MV Dareen alongside at Portland.

As Australian livestock exporters await a green light from China to begin exporting feeder and slaughter cattle, shipments of beef breeding cattle to the market have been quietly growing.

China is still yet to finalise the details of a much anticipated protocol to allow imports of Australian feeder and slaughter cattle to commence, however, it has long had a protocol in place allowing the import of Australian dairy cattle and beef breeding cattle.

The latest official live export shipment data released this week shows that Australia exported 70,533 dairy and beef breeding cattle to China in the first nine months of this financial year – a 30pc increase on the corresponding period of the previous financial year.

Of that number, 53,659 head or 76pc were dairy cattle exported for breeding and dairy production in China.

The remaining 11,156 head or 24pc were certified beef breeding cattle.

That volume represents a 39pc increase on the 8008 beef breeding cattle exported from Australia in the corresponding period of the previous financial year.

Exporter Frontier International Agri is currently filling an export shipment of 12-18 month old Angus breeders out of the bluetongue-free zone of Southern Australia for export to China.

“The realisation of a shortage of beef breeding stock in China is driving that demand,” Mr Gooden said.

“Some of the smart operators are seeing that the next move is into beef type cattle, that is where they see the next phase of growth is.”

Mr Gooden said the tightening supply of cattle and the recent acceleration in Australian cattle prices was making it tougher to source cattle in the current market.

Beef Central also understands from conversations with other live export industry sources that demand for beef breeding cattle into China was at least partly impacted by media reports creating the perception that huge numbers of Australian feeder and slaughter cattle were set to flood the Chinese market last year.

The momentum for beef breeder exports to China was building steadily from late 2013 before it began slowing in mid-2014 amid increasing dialogue around the anticipated signing of a feeder/slaughter protocol.

“We would have doing more beef breeders in my view if they (Chinese importers) hadn’t been so concerned about that big statement around feeder and slaughter cattle,” one export industry source commented.

“They were doing quite a few breeders then they pulled up on it. They thought why am I doing breeders, I am going to be flooded with a million head of feeder cattle, and they (the breeders) won’t be worth any thing.”

Another source said that the delays in the commencement of the feeder/slaughter trade to China had seen some major operators resume their breeder import programs.

“In the short term we don’t see conditions in China as nearing a boom or anything like that for either trade, but market conditions have stabilised and the breeder trade is again just building steadily,” the export industry source said. 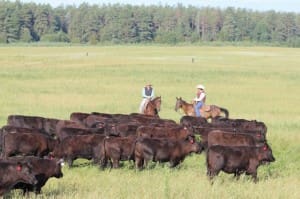 Angus cattle on a Miratorg owned farm in Russia.

The latest livestock export statistics also highlight a significant increase in Australian cattle exports to Russia in the first nine months of the 2014-15 financial year.

Australia exported 30,393 cattle to Russia from July 2014 to March 2015 – a 71pc increase on the previous corresponding period.

Trade sources say that steers have dominated most recent Australian shipments to Russia, and point to two particular reasons for the increase in live cattle exports to the market.

One is that the live export trade has become something of a beneficiary of Russia’s decision last year to ban boxed beef imports from a range of western countries in response to sanctions imposed on Russia based on its activities in the Ukraine. Live cattle imports were not included in Russia’s ban and the increase in shipments of live cattle is seen as at least partially motivated by a lack of imported beef now in the market. (However importing beef via live export is obviously an alternative with a much longer lead time: Trade sources say it takes about 90 days from the time Russia places an order for live cattle for those cattle to be assembled in Australia and shipped to Russia, and then another 150 days on feed in Russian feedlots before the beef is available to the market – or about eight months in total).

The second reason is that the country’s agribusiness giant Miratorg, which has been importing large numbers of breeding and feeder Angus cattle from Australia, the US and Canada for several years, has recently opened its first major abattoir as well as a second 50,000 head feedlot, and has been buying steers to fill that new capacity.

Miratorg today runs a reported 250,000 cattle in Russia on more than 40 farms.

Feeder cattle are fed on a corn-based silage ration for 150 days before processing in the new abattoir, which cost a reported US $250 million to build.

At full capacity the abattoir can process 1000 cattle per day and is the final link completing Miratorg’s new domestic supply chain from paddock to plate.

Locally produced quality corn-fed Angus beef from the company’s US-designed feedlots is now increasingly appearing at the top of restaurant menus in Russia, a place that until recently was occupied by imported beef, according to trade sources who regularly visit the market.

When the abattoir opened last November, Miratorg executive Dmitry Moyseenko told Russian media that in 2015 the company planned to increase production from the plant to 40,000t, which would replace about 7pc of the volume of beef Russia was importing prior to last year’s import bans.