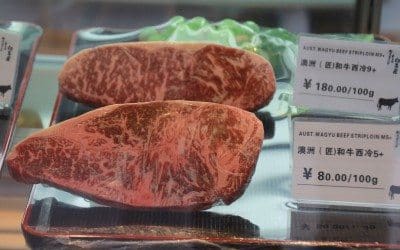 If following the money is a fair indicator of where industry confidence lies, then the volume of investment currently being directed at the Australian beef and cattle trade to China speaks volumes.

Visiting China last week as part of a media tour organised by Wellard Rural Exports, Beef Central witnessed several examples of how stakeholders on both sides of the trade are currently investing confidently  in new trade relationships and multi-million-dollar supply chains.

Many are substantial investments in their own right, but when woven together tell a compelling story of where many leading players see the most exciting growth opportunities for Australian beef and cattle exports.

The focal point of the tour was a case in point – the delivery to Wellard Rural Exports of its brand new $90 million state-of-the-art cattle and sheep carrier, the M/V Ocean Shearer.

Able to carry 20,000 adult cattle or 75,000 sheep or a combination of both, the Chinese built mega-ship is the world’s largest purpose-designed livestock carrier.

While it will serve all markets, not just China, the Shearer is part of a major strategic investment by Wellard aimed at capitalising on future growth in the Chinese market, which Wellard CEO Mauro Balzarini predicts will soon take more than one million Australian cattle a year.

Wellard also confirmed last week that construction is now underway on two new feedlots and an abattoir near the Port of Tianjin near Beijing, part of a $15 million supply chain Australia’s largest livestock exporting company is building with its Chinese joint venture partner Fulida.

The infrastructure is due for completion by the end of this year and will become a focal point of Wellard’s cattle exports to China in coming years.

Wellard expects to deliver a sea shipment to the supply chain before the year is out, and Beef Central also understands that at least one other exporter is now very close to having a supply chain secured that will allow it launch the first sea shipment of cattle from Australia to China under the recently signed feeder and slaughter protocol.

Further underlining the level of investment flowing towards the live cattle trade, the Ocean Shearer is the second multi-million dollar livestock export vessel to have been launched for Australia’s livestock export industry in the past month. The Vroon-owned Greyman Express, the seventh of seven new G-Class vessels to be built by the company in the past three years, was launched at the COSCO Shipyard in Guangzhou in late March.

Chinese beef importers are also feeling confident about the future for Australian beef into China.

Dalian-based importer of Australian Wagyu and grainfed beef, Qinglin Zhao, currently imports high end product from AA Co and is betting on the trade’s future by expanding his business.

He currently has one specialist retail shop stocking exclusively high quality Australian beef in Dalian, is about to open a second in Shanghai, and says he has plans to build as many as 40 similar shops across China.

Grace Gao, the general manager of one of China’s largest individual cattle importing companies, the Goldrich International Company based in Dalian, said Chinese consumers highly valued Australian beef for its natural and healthy qualities. She said Chinese importers are very eager to see the Chinese Government approve more Australian abattoirs for chilled beef access so more beef can be imported.

Over the past 10 years AustAsia has enjoyed significant support from the Chinese Government which has provided road, power and water infrastructure and the land for each development under 40 year leases as it has gone about establishing six model dairy farms in Shandong Province and Inner Mongolia.

Each farm is very similar in design and scale, individually milking around 6000 Australian-derived Holstein cows four times a day in automated rotary dairies (with almost 40,000 now being milked in total).

The farms have each cost roughly US$80 million to establish, including the cost of sourcing the cows, and AustAsia currently plans to build another two farms every year.

These developments may be dairy focused but have significance for the beef industry because all dairy cattle eventually find their way into China’s beef supply.

A nearby Temple Grandin-designed feedlot recently established by Japfa also now feeds all Holstein bull calves produced from the AustAsia operations for supply into the Chinese beef market.

These are just some examples of the type of investment now being directed at the Chinese beef and cattle market.

Keep an eye out on Beef Central’s daily emails in coming days for more detailed reports on these and other developments explored during our recent tour of China.