After outpacing 2017 export volumes for the first two months of the year, cattle shipments to Indonesia fell behind year-earlier figures in March. 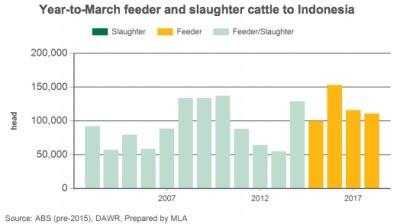 For the first two months of 2018 export figures from Australia to Indoneisa were running 22 percent higher than a year earlier as more shipments flowed to supply cattle to feed for the Ramadan period in May/June.

However March figures show total export volumes to Indonesia for the year have slipped 4 percent behind the first three months of 2017.

But overall exports to all markets 21pc higher…

Despite the challenges in Indonesia, the latest figures reveal that overall Australian cattle exports to all markets in 2018 are outpacing the same period last year.

In total Australia has exported 225,765 cattle to all markets since the start of January, 21 percent higher than the first three months of 2017.

Boosting that number has been a 66 percent increase in cattle exports to Vietnam, which has taken 44,319 cattle (93 percent of which are slaughter cattle) so far this year.

That increase is albeit coming off a much lower base, given that 2017 saw Australian cattle exports to Vietnam slump to 165,172 head (down from 362,248 head just two years earlier) in the midst of supply chain management issues following a series of widely reported animal welfare crises and importer resistance to higher Australian cattle prices at the time.

Year on year growth so far in 2018 has also been recorded in exports to Israel, which has now received 11,410 feeder cattle for the year, 17pc higher year-on-year.

The increase in slaughter cattle shipments to China has also boosted Australia’s overall cattle export figures so far this year.

China has received 7633 slaughter cattle from Australia in 2018. This growth has helped to offset a 32pc decline in breeder cattle imports so far this year, taking overall shipment numbers from January to March to the market to 19,647 head, 4pc up on Jan-March 2017.