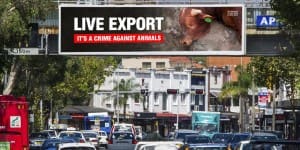 One of the new billboards launched by Animals Australia in its latest campaign for a ban on livestock exports.

The battle over the future of  Australia’s livestock export industry is about to intensify, with Animals Australia launching a new billboard offensive designed to turn public and political support against the trade.

The animal rights group sees 2015 as the year it can win enough support to ban the $1 billion a year industry.

The new campaign uses bus, taxi and billboard advertisements to declare the trade a “crime against animals”.

It is seeking online donations for its Live Export Fighting Fund to finance what it is calling the biggest anti-live export campaign in history.

In response Australia’s livestock export industry says that while Animals Australia uses donations from the public to pay for billboards to inflame public outrage against the trade, livestock exporters are investing millions of dollars to make tangible improvements to animal welfare standards in foreign markets.

The Australian Livestock Exporters Council says the livestock export trade is a “legal and legitimate industry” which is  responsibly striving to meet community animal welfare expectations.

It also warns that the true consequences of stopping the trade would be to obliterate a billion dollar plus industry and the livelihood of thousands of people.

Nor would a ban of the trade improve animal welfare.

“Australian markets would go to exporters who don’t invest in welfare, don’t train staff in livestock humane handling, don’t consider the health and welfare needs of livestock on trucks and vessels, don’t work to any welfare standards and who don’t strive for continuous improvement,” ALEC chief executive officer Alison Penfold said this morning.

“We could see significant negative welfare consequences for cattle, sheep and goats left here at home without viable markets.”

Suggesting the trade is “criminal in nature” was simply wrong, she said.

Last month a Federal Government review found that the mandatory Exporter Supply Chain Assurance System (ESCAS) introduced three years ago to improve welfare standards in the trade was working, with the continuous tracking system showing that more than 99pc of the 8 million animals exported since that time had experience positive welfare outcomes.

Ms Penfold said the industry acknowledged that despite this result there had been a number of serious incidents of mistreatment that had caused pain and suffering to the animals involved and that “it must do better to prevent further incidents”.

The industry was striving to achieve a “zero harm” goal for all exported livestock, Ms Penfold said.

Animals Australia says that in 2015 it will ensure that politicians are reminded that live exports are “a crime against animals” at every turn, and has vowed to continue its campaign if needed right through until the next Federal election.

The group says that despite Government assurances that live export companies would be punished for breaking the rules, it was business as usual while animals kept suffering.

“The Abbott government continues to insist live export rules are ‘working’ but this is untrue,” Animals Australia says on its fund-raising website.

“We are seeing more violent acts of abuse than ever before and re-offending companies are not being held to account.

“Until now they could rely on the suffering of animals being far from public view, thousands of kilometres away. So on taxis we’re bringing the truth about live export closer to home.”

“Just imagine if every single day, the very politicians who have the power to end this trade, were confronted with the truth of what they are supporting as they drive to work, as they travel to the airport, as they wait at the traffic lights,” AA says on its website.

“Imagine if we could keep the truth about live export on export on high impact billboards and other strategic sites across the country right up until the next Federal election.”

Animals Australia says it has one of Australia’s top media buyers booking the best locations around the country “to ensure this message is seen by those who most need to take notice”.

The group also claims that “many” Coalition politicians are already uncomfortable with their party’s support of live export.

“They know that the vast majority of Australians consider it to be immoral and cruel.

“Now they need to know that Australians consider live export a crime that no government or political representative could or should support.”

Ms Penfold said the livestock export industry had come a long way with animal welfare reforms, with new regulatory parameters extending exporter responsibility onto foreign soil, investment in new and improved infrastructure and the training of over 7500 workers overseas in animal handling, husbandry and slaughter which has seen Australia lead animal welfare standards among about 100 livestock exporting nations.

“We all want the humane treatment of livestock but we do not accept that banning the Australian live trade is the way to achieve it.

“Rather than spending money on billboards and buses as a means to improve animal welfare, Australian live exporters and their customers are investing in people and livestock facilities around the world to ensure the welfare of livestock in our charge through practical on-the-ground training and improvements in handling, husbandry and slaughter practices.

“We know we are not done yet and will continue to implement improvements to our practices and infrastructure by working constructively with our customers and facility operators that handle Australian livestock.”