The Australian Livestock Exporter Councils immediate past chairman Peter Kane made the award at the 2014 Livex Forum gala dinner in Melbourne last night and said he was proud to have Tom in the industry. 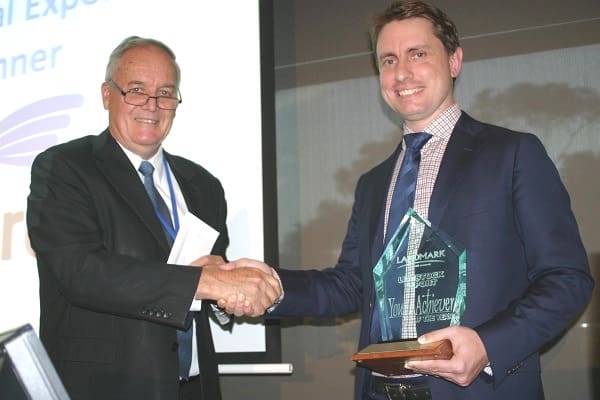 “He is smart, enthusiastic and he really sees the needs of his company and the long-term needs of the industry, and the value of collegiality across the industry,” Mr Kane said.

“He’s a really good bloke and he will be a credit to his company and the industry.”

Tom, 33, and wife Sophie had twin boys Frederick and Benjamin on October 14. He joined Austrex four years ago from an accountancy and finance background. He was looking for an opportunity to be involved in agriculture on returning from an overseas trip.

“I grew up on a property so it is an area that I am deeply passionate about.”

He said the award was also recognition and reflection of the work, guidance and support of his colleagues and Austrex senior management.

Eight months after Tom started with Austrex the industry was challenged with the closure of the Indonesian live cattle trade.

“During this time I able to work closely with governments and importers to help set up supply chains and gets things running again.

“I must admit that without the substantial investment commitment and tireless efforts of MLA and importers, it was highly unlikely that the trade would be in such a strong position today in Indonesia and in other feeder/slaughter markets.”

He said Austrex’s Indonesian team members were ‘super stars’ at what they did.

It was important that exporters continue to build a transparent, sustainable industry with long-term global supply chains for Australian livestock, providing a solid platform for producers to market their premium product to the world.

“Transparency, Industry collaboration and a robust quality assurance system form the cornerstones of how industry can achieve long-term sustainability and social license,” he said.

“He works closely with international buyers and the company in promoting, training and delivering ESCAS. He manages the company’s stock-on-hand cattle supply program throughout Australia.

“He also has an important trouble-shooter role with the Department of Agriculture in Canberra on ESCAS and has earned respect for his professional and co-operative manner in which he undertakes these tasks.”

Tom was recently appointed as an exporter representative on the Livestock Export Global Assurance Program Consultative Committee – an important and influential posting as the industry strives to develop a well-define export quality assurance system for the live trade.

“He is an unassuming character that does not look for recognition, but gets the job done quietly and efficiently,” Mr Kane said.

“He has demonstrated a desire to listen and learn from his peers, showing respect for the past and harvesting information to innovate now and into the future.”

Tom’s approach has contributed to cultural change and adoption of ESCAS in a number of markets which has significantly increased the sustainability of the livestock export trade.

“When interviewed for the award, he left little doubt of his leadership potential and place in the industry in the years to come.

“He has a big vision for the industry beyond his own company;  one that embraces sustainability and broadens the industry’s understanding of the public’s expectations of us,” Mr Kane said.

“He sees shared challenges fought by a united industry.”

Mr Kane said the nominees for the 2014 award were all “stand-outs”.

“It is exciting to see so much potential coming through the ranks of the industry and I congratulate the other three for their outstanding contribution to the trade and recognise them as young achievers in their own right.”